Is your community making smart decisions about surveillance?

“There ain’t no such thing as a free lunch.”

The saying has been around for decades, but it has never been truer in an era where technology so often seems to promise something for nothing. Dig deeper, and you’ll usually find there’s a hidden cost — and it could be one you’re not so happy to pay.

That’s why the ACLU of California has just released Making Smart Decisions about Surveillance: A Guide for Communities. It provides step-by-step assistance to help your community ask and answer the right questions about surveillance. It includes case studies from California and elsewhere highlighting smart approaches and missteps to avoid, as well as a model Surveillance & Community Safety Ordinance to ensure that public input, transparency and accountability are part of every discussion about surveillance technology. 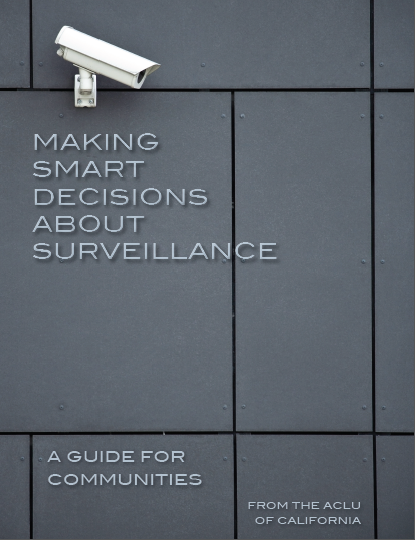 Unfortunately, too often that’s not the case. As our interactive map on the state of surveillance in California illustrates, while many communities have adopted some form of surveillance technology, there is little evidence that community members had or have the opportunity to debate its adoption or the resources to evaluate its impact. Even courts are sometimes left out of the loop, blocking their essential oversight function.

Because each community and each surveillance proposal may present a different set of issues, there is no one-size-fits-all answer as to whether surveillance is the right choice. The key to making a smart decision is to thoroughly assess every proposal with the benefit of input from the entire community. We’re delighted that San Francisco Supervisor John Avalos and Santa Clara County Supervisor Joe Simitian have announced plans to introduce ordinances in their communities to ensure that happens every time. We hope our guide and resources will also help your community make smart decisions about surveillance going forward.