By Matt Cagle, Technology and Civil Liberties Attorney at the ACLU of Northern California 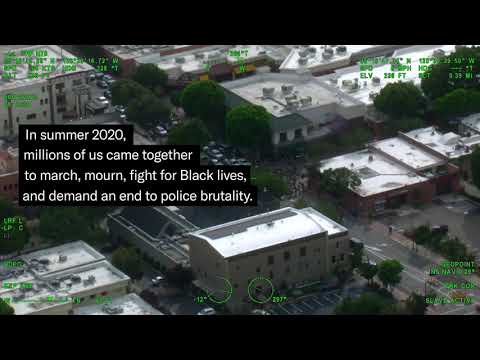 In the summer of 2020, when so many of us joined Black-led protests and peacefully took to the streets to march, mourn, demand an end to police brutality and call for justice for George Floyd and the many other Black lives taken by police, California police spied from above with high-definition video surveillance.

In Sacramento, CHP closely zooms in on a protester as they sit alone on a fountain next to a Black Lives Matter poster. An hour later, when people peacefully assemble in front of the fountain to hear an organizer speak, CHP continues to hover and record, zooming in closely on people’s faces and signs.

In Placerville, CHP captures detailed footage of several dozen protesters peacefully assembled in front of the El Dorado County courthouse. The video captures an organizer thanking and hugging participants as they hold up signs. CHP also recorded a Riverside County courthouse protest described as a “vigil... so quiet that the loudest sound was helicopters overhead.” In the CHP recordings, police cameras zoom in on faces and linger over people speaking at vigils, handing out water, making signs, participating in die-ins, and even dancing.

This video footage is just one piece of the CHP aerial surveillance picture. We also obtained nearly two hundred pages of agency flight logs detailing the times, places, and descriptions of CHP flights, which referenced deployments to protests in late May and early June throughout the state.

From Southern California to the Central Valley and Northern California, the logs show how CHP deployed its surveillance aircraft over protesters, with officers logging entries such as “No Justice, No Peace Protest,” “Aerial Surveillance for George Floyd Protest,” and “Patrol flight over peaceful protest.” These surveillance deployments appear to be part of the tens of millions of dollars that CHP reportedly spent policing the protests from late May to early June 2020.

The footage produced by CHP also raises serious questions about how CHP decides what kinds of protests to surveil and record. We asked CHP whether it had any surveillance footage of other protests last year, including those related to the COVID-19 pandemic and associated shelter-in-place orders. But in hour after hour of footage provided by CHP, what we saw were protests against police violence, not protests of pandemic policy. The mere possibility that CHP may have fixated its surveillance and recording on the racial justice protests is extremely troubling.

The California Constitution guarantees the right to free expression and assembly and provides an inalienable right to privacy to protect people against modern threats of surveillance – and for good reason. Tech-powered government surveillance and the recording of people exercising their rights of free expression and association can be used to intimidate, instill fear, and undermine the exercise of these rights. When we reached out to organizers and community members who attended the surveilled protests last summer, we heard this first-hand.

Recalling their experience being watched and recorded by CHP helicopters during a protest in Cesar Chavez Park last May, Sacramento resident Salisa Campos described the police presence as “psychological warfare…the protests were very peaceful and it was mostly young people, kids in attendance…but many people got scared off by the police aggression and helicopters, and it felt like the goal of the low-flying choppers was to terrorize people.” Another protest attendee feared that CHP might use the footage as “social blackmail,” where local politicians and residents might face retaliation for showing up in solidarity with Black protesters.

These are reasonable concerns, informed by a long and troubling history of government agencies surveilling movements for freedom and justice. CHP captured hours of extremely detailed video footage of racial justice protesters – and we do not know who in the government has access to it, how it has been used, or how it may be used in the future. What we do know is that recent years, the FBI has targeted Black activists as “black identity extremists,” continuing its long legacy of attempting to disrupt and discredit Black-led movements. Decades earlier, California police agencies blatantly attacked the Black Panthers and infiltrated student organizations at UCLA. CHP itself has a history of anti-movement activities and discriminatory policing. It was reported that CHP recently used aerial surveillance to target non-existent anti-fascist protesters based on fraudulent social media posts circulated by right wing accounts.

The events of 2020 demonstrated that we are fighting for justice and equality on new terrain. Government agencies and the tech industry are too often working hand-in-hand, wielding the latest technologies to prop up oppressive systems and undermine movements for justice. CHP’s use of aircraft and high-resolution cameras to spy on racial justice protests is an alarming illustration of this pattern.

CHP shouldn’t be launching high-powered surveillance aircraft to spy and record people marching for racial justice. And Californians protesting police violence should not be in the digital crosshairs of police surveillance. It’s long past time we reckon with the legacy of harm and make sure that it can’t continue. Join us in demanding real action from elected officials to investigate and address out-of-control police surveillance in California and further strengthen laws to protect our rights and support our movements for social justice.

Matt Cagle is staff attorney for the Technology and Civil Liberties Program at the ACLU of Northern California. 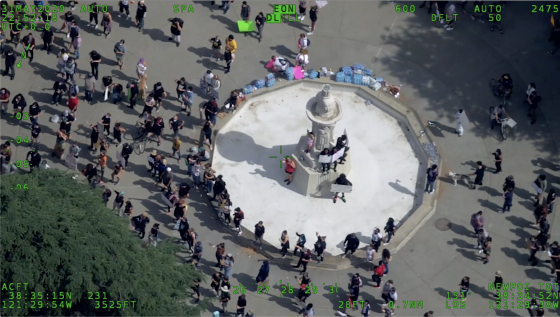