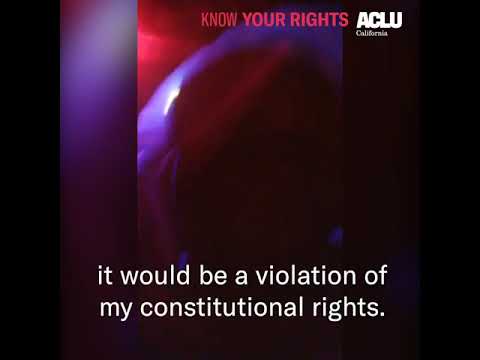 BAKERSFIELD — Robert Mitchell, a Black man, refused to answer questions from Bakersfield Police Department officers when they stopped the car he was riding in on the pretense that air fresheners were hanging from the rear-view mirror.

Mitchell knew he was well within his rights not to answer. Still, the police arrested him, put him in handcuffs, forced him into the back of a police car, and hauled him off to jail.

But Mitchell, who spent 12 hours in jail despite never being charged with a crime from the incident, was not about to let the matter go quietly. His protests that he had been wrongly arrested and jailed led to a lawsuit filed on his behalf in January 2018 by the American Civil Liberties Union Foundations of Southern and Northern California and the law firm of Kirkland & Ellis LLP against the City of Bakersfield and police officers.

The City of Bakersfield agreed to pay $60,000 to settle the lawsuit. Because of that agreement, the ACLU has formally dropped the suit.

The lawsuit charged Mitchell’s rights had been violated under the First and Fourth Amendments to the United States Constitution, the California Constitution, and state law.

“I should never have been arrested for asserting my constitutional rights,” Mitchell said. “I hope that going forward no one in my community will be arrested for exercising their rights.”

Community groups in the area have long protested that police officers overstep their authority and engage in intimidation tactics such as stopping people in cars and bicycles under the slightest pretense, then arresting them when they assert their rights. Groups have specifically criticized the Bakersfield Police Department’s Special Enforcement Unit — whose officers arrested Mitchell — for targeting members of racial minority groups.

Evidence obtained in the lawsuit revealed that the Bakersfield Police Department fails to adequately train officers on the Fourth Amendment rights of the individuals they stop.

“The Bakersfield Police Department should immediately change its policies and training to ensure that what happened to Mr. Mitchell will not happen to anyone else,” said ACLU SoCal senior staff attorney Adrienna Wong. “Everyone, no matter their race or neighborhood they live in, has rights to liberty and privacy that police must respect.”

The traffic stop incident involving Mitchell happened on March 17, 2017 when officers stopped the car — all the occupants were Black — for the purported purpose of enforcing state vehicle code violations. The officers went on to question the car’s occupants about a variety of unrelated matters.

Mitchell, who recorded video of the incident on his cell phone, refused to give his name or other information, noting that he was not suspected of a crime. He was ordered from the car, handcuffed, arrested, and taken to Kern County Central Receiving Facility where he was jailed.

The lawsuit was for violating Mitchell’s constitutional rights and laws by unlawfully prolonging the traffic stop and arresting him without probable cause.

“We are happy to have had an opportunity to work with the ACLU to get Mr. Mitchell the justice his case so clearly demanded,” said Matthew Gamsin, an associate at co-counsel in the case, Kirkland & Ellis LLP.

The ACLU SoCal opened an office in Bakersfield in October 2018. It’s the fourth office of the ACLU SoCal, joining those in Los Angeles, Santa Ana, and San Bernardino.