Two months in the tank

"Stop resisting, fag!" the five deputies barked at the inmate while they beat him, leaving him bruised from head to toe and immobile for days.

This is life for gay, bisexual and transgender (GBT) people incarcerated at West Valley Detention Center. In the mere two months I served there, I witnessed six occasions of an unprovoked inmate beating by deputies while uttering bigoted slurs.

Inmates who identify as GBT are not only punished for what we've done, but are also dealt an extra layer of punishment because of who we are. Because I am gay, I had to serve more time and under much worse conditions than those inmates who identified otherwise.

GBT inmates at West Valley are housed in the so-called "Alternative Lifestyle Tank" (ALT). The tank is meant to keep us safe from potential harm, but instead we suffered a different type of harm.

On average, I was only allowed to leave my cell for 30 minutes a day. Most other people in the jail are out all day or, at worst, three hours a day. I was not allowed to work or participate in the rehab or educational programs that others had the chance to access. People in the work program not only learn skills and get special privileges but also earn credits that count toward reducing the length of their sentences. I repeatedly asked jail officials if I could work and each time I was told I was not allowed because I was housed in the ALT.

I knew of others who hoped to kick their drug habits through rehab programs, but we are not provided access to the rehab facility. And others wanted to do the vocational programs – like the culinary program – or get their GED, but were told that GBT inmates are not allowed.

As a former deputy sheriff and a private investigator for nearly 25 years, I know that justice must be served to those convicted, but the system is supposed to be (or at least, try to be) fair. 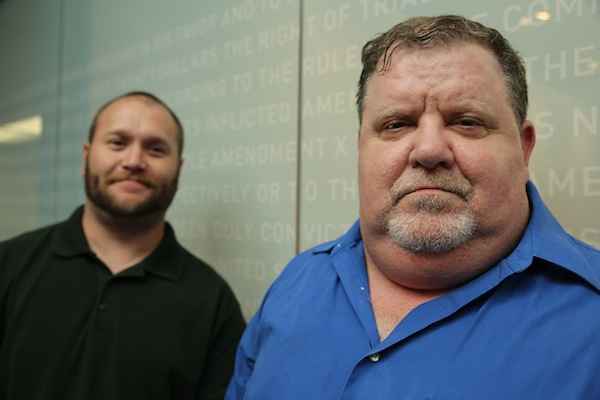 So, today, I joined ACLU SoCal and Kaye, McLane, Bednarski & Litt, LLP in a lawsuit against the San Bernardino County Sheriff's Department for discriminating against me, and all other GBT people who are imprisoned in the ALT at West Valley.

It is wholly unfair and un-American to make us serve longer sentences or harass or abuse us because of our sexual orientation or gender identity. What's more, by denying inmates any rehabilitation programs, the county strips us of the chance to better ourselves while in jail and gain skills that will help us reenter our communities on solid footing and reduce the chances we'll ever find ourselves back in jail again.

Dan McKibben is a plaintiff in McKibben v. McMahon, a lawsuit filed by the ACLU of Southern California and Kaye, McLane, Bednarski & Litt, LLP against the San Bernardino County Sheriff's Department over discriminatory policies at the West Valley Detention Center that deny gay, bisexual and transgender inmates equal access to work, recreation and rehabilitative programs solely based on their sexual orientation or gender identity.​