Learning takes time. Time to grasp. Time to practice. Time to allow yourself to make mistakes and improve on the next try. One of the critical struggles educators face is finding a way to teach students new skills and concepts in a short amount of time.

As a recent study by UCLA’s Institute for Democracy, Education, and Access found, this challenge is even more daunting for teachers at high-poverty schools.

The study's key finding is that public school students in California have “markedly different amounts of instructional time depending on the neighborhoods in which they live.”

Because of the constant interruptions, delays and routines at high-poverty schools, students that attend these schools lose roughly 30 minutes of instruction per day when compared to their counterparts at low-poverty schools. And they lose nearly ten additional days each year due to the issues with teacher absences, emergency lockdowns and preparation for standardized tests. That's two weeks less to learn, practice and improve throughout each school year.

This study reinforces the core premise of Cruz v. State of California, a lawsuit the ACLU of Southern California filed earlier this year with Public Counsel, and the law firms Carlton Fields Jorden Burt and Arnold & Porter LLP—that learning time matters. The UCLA study also confirms that this is a statewide problem requiring state-level solutions, as we argue in Cruz. 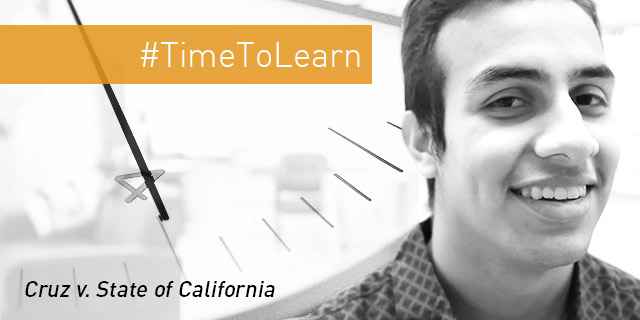 Last month, as a result of the lawsuit, a judge ordered the State of California and state education officials to intervene to stem the loss of learning time at Jefferson High School in Los Angeles. This important victory showed that California courts see the loss of learning as unacceptable. It also confirmed that the state is ultimately responsible for ensuring that students have an equal chance to succeed in school, no matter the neighborhood they live in.

The UCLA study's findings provide even more evidence that the state—like so many of its students at high-poverty schools—has run out of time. California leaders must act now to create systems that catch and correct the major education disparities facing students who attend high-poverty schools.

David Sapp is director of education advocacy with the ACLU of California. Follow ACLU SoCal on Twitter.