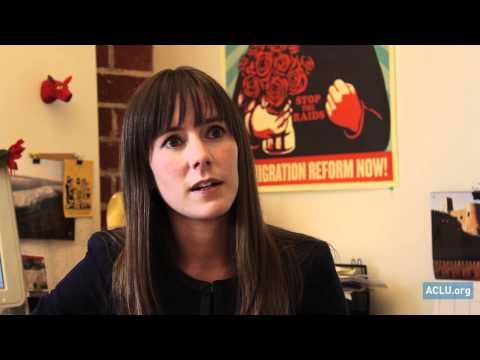 %3Ciframe%20src%3D%22https%3A%2F%2Fwww.youtube-nocookie.com%2Fembed%2FII8e3PbiRrg%3Frel%3D0%26autoplay%3D1%26version%3D3%26playsinline%3D1%22%20frameborder%3D%220%22%20width%3D%22640%22%20height%3D%22360%22%3E%3C%2Fiframe%3E
Privacy statement. This embed will serve content from youtube-nocookie.com.
A coalition of civil liberties organizations representing a domestic violence victim placed in deportation proceedings after calling 911 is calling upon state lawmakers and Los Angeles law enforcement to prevent the “Secure Communities” program of the Department of Homeland Security from adversely affecting her and future victims of crime in California.
On February 6, 2011, Los Angeles-resident Isaura Garcia was arrested and placed in deportation proceedings after she called 911 to seek help after her boyfriend violently threw her out of their apartment.  Although Isaura is a victim of severe ongoing domestic violence with a history of 911 calls and emergency room visits, LAPD officers arrested her after crediting her boyfriend’s version of events over hers.  Startled that the officers were arresting her, Isaura fainted.  The police officers took her to the hospital where a doctor found bruises on her body and identified her as a victim of domestic violence.
Nevertheless, LAPD officers booked her into LAPD custody on a felony domestic violence charge, resulting in her being identified by immigration authorities at the time of booking.  Despite the fact that LAPD dropped its charge, Isaura was transferred to immigration authorities within four days and placed in deportation proceedings.  On March 26, her boyfriend was arrested on manslaughter charges and remains in custody.
“The dangerous message that Isaura’s case sends to immigrants who are victims or witnesses to crimes is that if you call the police, you might be deported,” said Angelica Salas, Executive Director of the Coalition for Humane Immigrant Rights of Los Angeles (CHIRLA).
Isaura now faces deportation due to the operation of Secure Communities, a controversial program of the Department of Homeland Security that requires local police departments to share the fingerprints of arrestees with immigration authorities.  Although the program purports to identify serious criminals, in practice it identifies anyone booked into police custody, including crime victims and non-criminals, for transfer to immigration authorities.
“Secure Communities ends up providing security to criminals, including perpetrators of domestic violence,” said Hector Villagra, executive director of the ACLU of Southern California. “This couldn’t possibly make our communities more secure.”
Domestic violence victims are commonly arrested when police cannot tell the perpetrator apart from the victim. Recently released ICE statistics for the period between October 2008 and February 2011 show that 62% of people deported under Secure Communities following referral to immigration authorities from Los Angeles jails are either non-criminals or low-level offenders; 23% of those removed had no criminal record whatsoever.
“I still don’t understand why I was arrested, but had I realized I could be arrested after calling 911 for help and deported, I never would have called,” said Isaura Garcia.
Currently before the California State Assembly is a bill – the TRUST Act (AB 1081) – that would protect victims of crimes from being swept into deportation proceedings by Secure Communities.  The bill, introduced by Assemblymember Tom Ammiano (San Francisco) and co-sponsored by, among others, Assemblymember Gil Cedillo (Los Angeles), will be heard by the Assembly Appropriations Committee on May 18.  A vote in Committee is expected by the end of this month.
Amidst the nationwide groundswell of concerns about the Secure Communities program, on May 4, the State of Illinois announced its desire to opt-out of the program completely and on May 5, the U.S. Congressional Hispanic Congress called for an immediate freeze of the program.  Also on May 5, San Francisco Chief of Police Michael Hennessy announced that he would not turn over non-criminals and low-level offenders to immigration authorities identified through Secure Communities.
“Secure Communities threatens the very fabric of trust that Los Angeles police have long sought to build and maintain with immigrant communities.  It is incumbent on our state lawmakers to enact the TRUST Act and Los Angeles police to adopt protections to ensure that victims and witnesses to crimes are not swept up by this dragnet immigration program,” said Jennie Pasquarella, Staff Attorney for the ACLU of Southern California.  “Crimes cannot be fought so long as fear of law enforcement pervades our communities.”
This week, in letters sent to Los Angeles Sheriff Leroy Baca and Los Angeles Chief of Police Charlie Beck, the coalition of civil rights groups requested they adopt policies to ensure that victims of crimes and non-criminals, like Isaura, are not handed over to immigration authorities.
Related Issues