The following was originally published in the Voice of OC, "Guest Column: ACLU Calls for a Stop to Militarization of Police"
President Dwight D. Eisenhower left office warning the American people of the military-industrial complex.
He said its “total influence – economic, political, even spiritual – is felt in every city, every Statehouse, every office of the Federal government.” 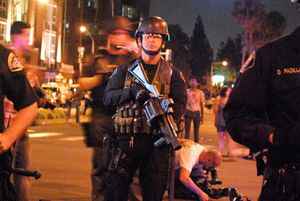 A police officer prepares to break up a protest in downtown Anaheim in July 2012. (Photo: Nick Gerda/Voice of OC)

We increasingly see its influence in our city streets because billions of dollars’ worth of military equipment has flowed from the federal government to state and local police departments. Departments now use these wartime weapons in everyday policing.
In the wake of demonstrations in Ferguson, Missouri, following the shooting of Michael Brown, the militarization of the police has been on full display. The media has been awash in images of armored vehicles, assault rifles, body armor, camouflage gear, gas masks and tear gas canisters, all used or carried by police officers whose chests were labeled “police” but who would look more appropriately deployed in Fallujah.
The militarization of American policing has been the direct result of federal programs.
For instance, Congress created the 1033 Program in 1990 to allow the Department of Defense to transfer excess military equipment free of charge to local law enforcement agencies. The program initially authorized the transfer of equipment that was “suitable for use by such agencies in counterdrug activities.” In 1996, Congress expanded the program’s scope to require that preference be given to transfers made for the purpose of “counterdrug and counterterrorism activities.”
Transfers to state and local police departments have increased as the wars in Iraq and Afghanistan have wound down. The 1033 program has transferred more than $4.3 billion in equipment since 1997. In 2013, it provided nearly half a billion dollars’ worth of military equipment to local law enforcement agencies, including to school police departments in California, some of which have reportedly received grenade launchers, assault rifles and other equipment, according to a report released this month.
There are few limitations or requirements imposed on agencies that participate in the 1033 Program, but one stands out. It is the requirement that agencies receiving equipment use it within one year of receipt.
This requirement, which creates a clear incentive for law enforcement agencies to find a reason to use the equipment, highlights the frightening logic at work here: that the equipment having been requisitioned, it must be used, whether abroad or at home. Indeed, in defending the program, the Defense Department's chief spokesman, John Kirby, stated: “This is excess equipment the taxpayers have paid for and we're not using anymore. And it is made available to law enforcement agencies, if they want it and if they qualify for it."
One of the more dramatic examples of police militarization is the use of SWAT teams to conduct ordinary law enforcement activities. Dr. Peter Kraska, Professor of Justice Studies at Eastern Kentucky University, estimates that the number of SWAT teams in small towns grew from 20 percent in the 1980s to 80 percent in the mid-2000s, and that as of the late 1990s, almost 90 percent of larger cities had them. He also estimates that the number of SWAT raids per year grew from 3,000 in the 1980s to 45,000 in the mid-2000s.
Departments created SWAT teams in the late 1960s as “quasi-militaristic” squads capable of addressing serious and violent situations that presented imminent threats such as riots, barricade and hostage scenarios and active shooter situations. In a study of SWAT deployments, however, David Klinger and Jeff Rojek, both at the University of Missouri-St. Louis’s Department of Criminology and Criminal Justice, found that the overwhelming number of SWAT deployments were for the purpose of executing a warrant -- 34,271 for warrant service, in contrast to 7,384 for a barricaded suspect and 1,180 for hostage-taking cases.
Not all communities are affected equally by police militarization. State and local agencies have amassed and deployed military arsenals generally to wage the failed War on Drugs, a war that has been fought disproportionately in communities of color. A recent report by the ACLU, which studied more than 800 SWAT deployments by law enforcement agencies between 2011 and 2012, found that 79% of deployments were for the purpose of searching a person’s home and in those deployments 42% of the people affected were Black and 12% were Latino.
Eisenhower feared many aspects of the military-industrial complex, but he never envisioned that the weapons it created would be turned on the American people, much less a discrete subset of them.
However, his prescription – that “[o]nly an alert and knowledgeable citizenry” can ensure that “security and liberty may prosper together” – applies today. The militarization of the police has occurred largely without public discussion or oversight. The public must interject itself now.

TAKE ACTION: Our communities are not war zones. Tell the Departments of Defense, Homeland Security and Justice to stop funneling billions into the militarization of state and local police forces.

The public has a right to know how law enforcement agencies are policing its communities and to judge whether they have unnecessarily turned many of our neighborhoods into war zones. The public should demand that state and local governments impose restraints on and provide transparency and oversight of the use of SWAT and other tactical teams.
In response to the public outcry over the excessively militarized response by local police in Ferguson, President Obama has ordered a review of federal programs that supply military equipment to local police departments. Closer to home, two California departments — San Jose and Davis — have opted to return heavily armored vehicles to the military to help keep the trust of the people they serve. The public should keep up the pressure on the government to rein these programs in and prohibit the transfer of automatic and semi-automatic weapons and armored personnel carriers.
Hector Villagra is executive director at the ACLU of Southern California. Follow ACLU SoCal on Twitter.
Related Issues