In California, you have the right not to show your ID to law enforcement ... in most cases

Many officers think they can legally arrest you for refusing to show your identification. Many times they are wrong.

And they were wrong when they arrested Jesse and Robert Katz. Last year, the Katz brothers were eating at a Barstow taco shop when another customer accused them (and other people in the restaurant) of stealing a vaporizer. The man called the police, but he had no evidence and admitted that he had none when the police arrived. Nonetheless, the officers asked the Katz brothers for their IDs. The brothers had done nothing wrong and exercised their right to refuse to show ID. The officers arrested them and took them to jail.

The ACLU SoCal investigated, and took their case. We prepared a lawsuit against the Barstow Police Department and reached a settlement. Barstow agreed that officers may not arrest someone solely for refusing to show ID. They agreed to train officers on this new policy. The Katz brothers will be compensated, but they had fought for nearly a year to get their cases dismissed and clear their names.
It’s important to note here that if you do exercise your right to refuse to show your ID, an officer might arrest you. It would be a wrongful arrest, but it would be an arrest. (And for some, the arrest may carry immigration consequences.) That said, if it happens to you, consider calling the ACLU. In California, as long as the request for ID is not reasonably related to the scope of the stop, you have the right to refuse to show your ID to law enforcement except in the following cases:

Now, take a look at this video where Charlena Michelle Cooks was arrested for refusing to show her ID to a Barstow police officer just after she had dropped off her second-grade daughter at school. 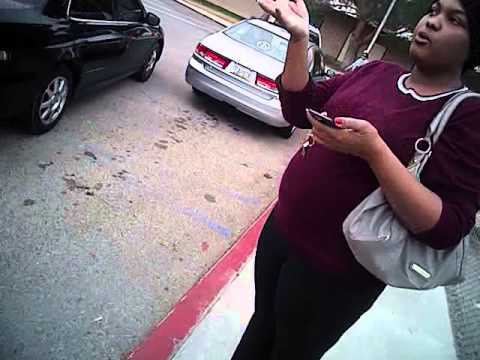 What role does race play?

Notice that the officer does not ask the first witness, who is white, for her ID, but he does ask the second witness [04:31], who is African American, for hers. What role does race play in this difference in treatment? According to an NBC News poll, 82 percent of African Americans say they believe police used standards based on race in encounters with the public. That’s a large percentage, but the impact of racial disparities in policing can’t easily be expressed in numbers. Imagine getting wrestled to the ground and handcuffed in front of your child’s elementary school. Imagine interacting with other parents afterwards. Imagine what kids who saw the incident tell your child. And if you think the whole incident happened because of your race, how does that impact your view of police?
If we’re going to take concerns about the role of race in law enforcement seriously, we shouldn’t speculate on what is happening. We should know. That’s where AB 953 and AB 619, introduced by Assemblymember Shirley Weber (D-San Diego), could be key. These bills would require officers to record data about their stops and uses of force, including the race of individuals involved, and report that data to the Attorney General. We give police a great deal of authority to stop people, to detain them, to search them, even to shoot them. Requiring police to report how they use those powers, in an effort to measure racial disparities and help identify solutions, is a small price to pay for fairer policing.

Handcuffs on a pregnant woman.

The Barstow officer handcuffed Cooks behind her back [06:03], even though she explained she was pregnant (eight months pregnant). By cuffing her behind her back, the officer created a risk to her pregnancy and increased the chance that she would fall and injure herself. She ended up on the ground and on her belly. She couldn’t use her hands to break her fall, and she was unable to pick herself up afterwards. The ACLU has long advocated restricting the use of restraints on pregnant women. It’s a terrible idea to handcuff a pregnant woman behind her back. This video shows why.

Body camera footage can be revealing.

This entire video came from a police officer’s body camera. Barstow Police gave Cooks this video as part of her criminal case. Some departments like the Los Angeles Police Department do not plan to make their body camera footage public, except when it is needed in a court case. What if you don’t have a court case, yet? How can body cameras promote transparency if departments keep the videos secret? Body cameras only help build public trust in the police when footage of important incidents is made available to the public, regardless whether it exonerates officers or implicates them.

Cooks should not have been arrested for failure to identify herself.

A person who is not suspected of a crime has no obligation to identify herself. Even if an officer is conducting an investigation, in California (unlike some other states), he can’t just require a person to provide ID for no reason. The officer can ask for ID, but the person can say no. Cooks said no, and she was wrongfully charged with resisting a peace officer. With the exceptions above, California law does not require you to provide identification to police. What happened here was wrong, and if the Barstow Police follow the new training, it should not happen again.

Jessica Price is staff attorney at the ACLU of Southern California. Follow ACLU_SoCal.