LOS ANGELES, Calif. - The American Civil Liberties Union of Southern California and the Bear Valley Unified School District announced today that they will enter into a settlement that will protect students' right to free speech. 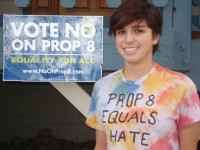 Under the agreement, the district will update its speech and dress code to reflect the constitutionally protected rights of free expression and speech that all students enjoy. In the spirit of promoting these constitutionally protected rights, the district and the ACLU/SC, will jointly organize a forum for teachers and students to provide them with accurate information about students' free-speech rights and California's nondiscrimination policies. At the request of district officials, the ACLU/SC will also provide training for teachers on California law governing nondiscrimination and student speech.

'We applaud the district for swiftly acting to ensure that every student is guaranteed his or her constitutionally protected right to free speech, especially on controversial political matters,' said Peter Bibring, ACLU/SC staff attorney. 'The new policy sends a strong message that the rights of students under California law will be respected, while helping to clarify those rights for students and educators.'

The agreement arose from an incident on Nov. 3, one day before California voters cast their ballots on Proposition 8. That day, Mariah Jimenez wore a T-shirt to school on which she had written, 'Prop. 8 Equals HATE.' The proposition sought to amend the state constitution and prohibit same-sex marriage.

In a two-page letter to Jimenez, district Superintendent Carole Ferraud acknowledged that school officials violated the student's constitutionally protected free-speech rights by forcing her to choose between removing her T-shirt or staying in the principal's office.

'We know that students do not shed their rights to freedom of speech or expression when they enter the school grounds and the fact that you were put in a position to have to make a choice between removing your shirt or remaining in the administration office was, in fact, a violation of your freedom of speech,' Ferraud stated in the letter sent to Jimenez today. 'The district extends apologies to you for taking adverse actions based on your lawful right to free speech.'

Upon hearing about the settlement Jimenez said, 'I'm glad the district apologized and recognized that I was exercising my free-speech rights. As a student, it's very important to me to be able to express myself and my political views about discrimination. With this settlement, I believe I have done something to protect other students' rights.'

The district has agreed to revise its policy to include language that explicitly states the speech protections guaranteed to students under established state and federal law, including the right to exercise freedom of speech and press by using bulletin boards, buttons and other materials not sanctioned by the school, as long as the speech is not obscene, libelous or slanderous, or creates a clear and present danger.

'The school district should be commended for using this opportunity to educate both teachers and students about the importance of free speech and nondiscrimination,' said Lori Rifkin, staff attorney for the ACLU/SC.