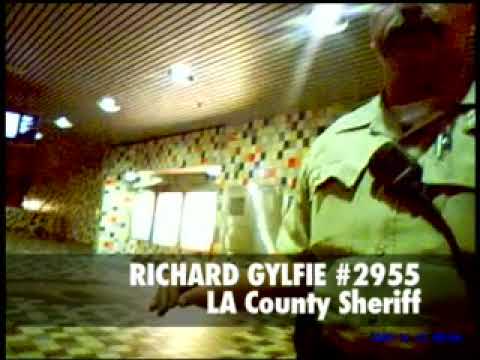 LOS ANGELES -- The American Civil Liberties Union sued the Los Angeles County Sheriff's Department on Thursday, claiming the law enforcement agency is harassing news photographers and other people who take pictures in public places.
The lawsuit, filed in U.S. District Court in Los Angeles, charges that sheriff's deputies have harassed several photographers over the past two years. It states deputies have stopped people, frisked them and in some cases threatened to arrest them for taking photos near subways, courthouses and other public places.
It names as defendants Los Angeles County, the Sheriff's Department and several individual sheriff's deputies.
The action was brought on behalf of three photographers, one of them a reporter for the Long Beach Post news site who said authorities indicated they became suspicious when they saw him taking photos near a courthouse.
Another of the plaintiffs said sheriff's deputies asked whether he planned to sell his photos to the terrorist group al-Qaida.
Sheriff's spokesman Steve Whitmore said public safety requires that deputies question people who might be engaging in suspicious activity, but that it's important they do it respectfully.
"Obviously we have to ask questions. There are security issues that are always at large," Whitmore said. He added that doesn't mean his department believes the lawsuit, brought by the American Civil Liberties Union of Southern California, has merit.
"Lawsuits only tell one side of the story," he said. "We look forward to telling the whole story."
The Long Beach Post photographer, Greggory Moore, said he was on a public sidewalk taking photos of passing cars for a story on Distracted Driving Awareness Month when eight deputies surrounded him. He said he was frisked and asked what he was doing.
Moore said authorities told him later that his taking photos across the street from a courthouse signaled a possible terrorist threat, which was why he was stopped and searched.
Photographer Shawn Nee said he was on his way home when he exited a subway station in Hollywood and decided to stop to photograph the new turnstiles there. He said a sheriff's deputy asked him if he was "in cahoots with al-Qaida" before searching him. He said the deputy also threatened to arrest him when he wouldn't identify himself or say what the photos were for.
Mickey H. Osterreicher, general counsel for the National Press Photographers Association, said such instances of photographers being stopped, questioned and searched is becoming more common, not only in Los Angeles but across the country. He added that security shouldn't be routinely used as a "pretext" to stifle free expression rights.
"Photography is not a crime. It's protected First Amendment expression," said Peter Bibring, senior staff attorney at the ACLU of Southern California. "Sheriff's deputies violate the Constitution's core protections when they detain and search people who are doing nothing wrong. To single them out for such treatment while they're pursuing a constitutionally protected activity is doubly wrong."
The lawsuit asks that the court declare the actions of the Sheriff's Department unconstitutional. It also seeks unspecified compensatory and punitive damages.
Related Issues