VIDEO: California is not Arizona

Hector Villagra, ACLU/SC Executive Director:
Today the Supreme Court struck down most of Arizona's SB 1070, the anti-immigrant draconian law that was passed in 2010. Three key provisions were struck down today and these were some of the most outrageous provisions in the law. 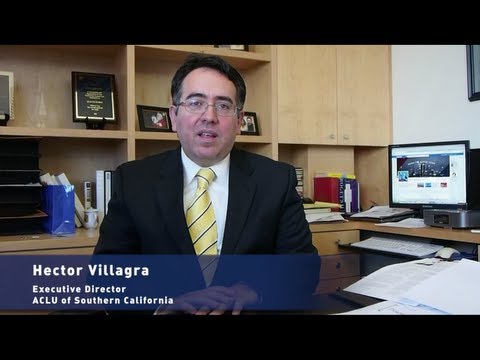 %3Ciframe%20src%3D%22https%3A%2F%2Fwww.youtube-nocookie.com%2Fembed%2FW_yV70QNbic%3Frel%3D0%26autoplay%3D1%26version%3D3%26playsinline%3D1%22%20frameborder%3D%220%22%20width%3D%22640%22%20height%3D%22360%22%20allow%3D%22autoplay%22%3E%3C%2Fiframe%3E
Privacy statement. This embed will serve content from youtube-nocookie.com.
By playing this YouTube-hosted clip, YouTube will place a long-term cookie on your computer. View YouTube's privacy statement. View the ACLU's privacy statement. The first made it unlawful for an undocumented immigrant without work authorization to look for or accept work.
The second made it unlawful for a lawful immigrant to not carry their immigration papers on them.
And the third would have allowed local police officers to make a warrantless arrest of a person if they suspected they had committed a deportable crime. And when it comes to deciding who is deportable, who is not -- who is removable and who is not -- local police officers simply don't have the training and the expertise to make that decision. So it would have been ridiculous. Thankfully none of those provisions will never see the light of day; they will never go into effect.
One provision was, for at least the moment, allowed to remain alive. And that's the so-called "show me your papers" provision. That provision allows a police officer in Arizona during a lawful stop, detention or arrest, to verify a person's immigration status if the officer believes the person to be undocumented.
How in the world is an officer supposed to decide that somebody's undocumented, other than by looking at the color of their skin, hearing their accent, or looking at their name? It is an absolute, blatant invitation for local police officers to engage in racial profiling. And it will violate the rights and the dignity of citizens and lawful immigrants throughout Arizona.
We have no doubt of this. And we have no doubt that we will be able to prove it in a court, and that we will be able to enjoin the "show me your papers" provision from ever going into effect.
Today has posed a question for states around the country: do they want to follow the Arizona example? Or do they want to follow a different path? California is not Arizona: it never has been and it never will be. There's one way to make sure of that, and that's to establish a law in California, that police here will be police and will remain police. They're not going to be turned into immigration agents.
We should not follow the example of Arizona. I think that today's decision shows that Arizona is a failed experiment. Most of this law-- most of it has been struck down. And the piece that remains is obviously on life support. And it's just a matter of time before that dies the death that it deserves.
There's one aspect of today's decision that I think everyone should be in agreement in. And that is our immigration system is obviously broken. The message that came through from the Supreme Court's decision, is that however frustrated a state might be, that doesn't give it room to pass its own immigration laws.
And I think that's a message that the country should hear, and move away from pushing these sort of local proposals, towards pushing our elected representatives in Congress to do the right thing. They've known for years what it is, they've just refused to do it. And now's the opportunity for us to turn our attention back to them and the job they need to do.
Related Issues