Historic Measure Would Eliminate Administrative Fees that Are Disastrous for Families

LOS ANGELES ­— The Los Angeles County Board of Supervisors is scheduled to vote February 18 on a landmark measure that would eliminate county criminal system administrative fees that have plunged people into debt at the very point they are trying to rebuild their lives.

These assessments were not meant to be punitive or restorative, but even relatively small fees charged by the county for mandatory training and other programs can multiply into huge penalties amounting to thousands of dollars if people can't afford to pay them. Studies have shown that the fees disproportionately hurt people of color and low-income communities.

People whose lives were impacted by the assessments, plus community groups and activists, formed the Let's Get Free L.A. coalition. Its 2019 report, "Costs of Injustice: How Criminal System Fees are Hurting Los Angeles County Families," is cited in the measure the supervisors will vote on.

Coalition members will hold a press conference before the Board of Supervisors meeting. They will also express support for California State Senate bill SB 144, sponsored by Senator Holly Mitchell, that would end criminal administrative fees statewide.

WHAT: Board of Supervisors vote to eliminate criminal system administrative fees that can lay a debt trap for the poor. Before the supervisors meet, members of a wide-ranging coalition supporting the elimination of the fees will hold a press conference.

WHO: The press conference will feature individuals whose lives were impacted by criminal system debt, and representatives from organizations in the Let’s Get Free L.A. coalition, including the ACLU Foundation of Southern California, the Anti-Recidivism Coalition, the Community Coalition, Homeboy Industries, the National Lawyers Guild-L.A., Public Counsel, and the Youth Justice Coalition, as well as the L.A. County Public Defender Union, Local 148.

WHEN: On February 18, the press conference will be held at 12:30 p.m. The Board of Supervisors meeting will begin at 1 p.m.

WHERE: The press conference will be outside the front entrance to the Kenneth Hahn Hall of Administration, 500 West Temple St., Los Angeles. The Board of Supervisors meeting will be inside the building. 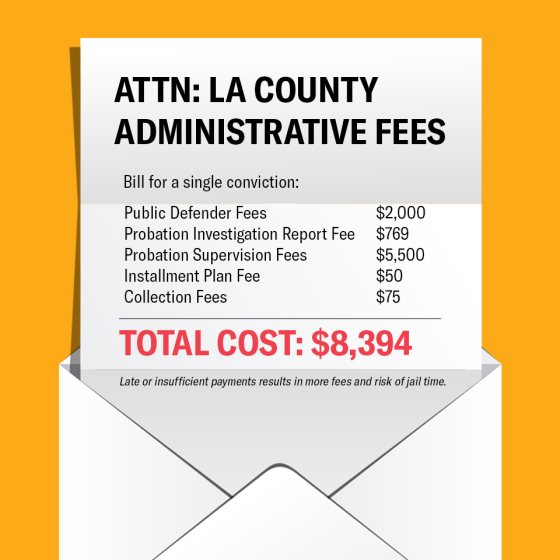 Costs of Injustice: How Criminal System Fees Are Hurting Los...