SACRAMENTO — Groundbreaking legislation that would require all on-campus student health centers at public universities in California to offer medication abortion services passed in the California Assembly today with an initial vote of 44 to 15. Now, Senate Bill 24, also known as the College Student Right to Access Act, goes back to the Senate for concurrence before it heads to Governor Gavin Newsom's desk.

"By ensuring that abortion care is available on campus, college students will not have to choose between delaying important medical care or having to travel long distances or miss classes or work. I thank the Governor for inviting women from conservative states seeking abortions to come to California to access their right to abortion care," said Senator Connie M. Leyva (D-Chino). "I also appreciate Governor Newsom's public declaration of support last year for SB 320—the previous version of SB 24—and am hopeful that he will continue to prioritize the rights of all Californians seeking abortion care, including those attending California's public university campuses."

Medication abortion is a safe and effective way to end a pregnancy up to 10 weeks. Currently no student health centers at public universities in California provide abortion services, despite offering other reproductive health services like birth control and STI testing. Almost half of the public university campuses in California are located five miles or more from an abortion provider, and some students must travel upwards of four hours to get care. A consortium of private funders has stepped forward to cover the costs to bring medication abortion to public university student health centers.

"Once a student has decided to end a pregnancy, they shouldn't be forced to go off campus to see a provider they don't know," said Ruth Shaber M.D., founder and president of Tara Health Foundation. "That is why funders have come together to cover all implementation costs of Senate Bill 24. California is showing the country that providing abortion care on campus is not only the principled thing to do, it's also popular and possible."

"As a college student seeking abortion care, I didn't have the resources to get the care I needed off campus, such as money or a car," said Jessy Rosales, a UC Riverside graduate and campus coordinator with the justCARE campaign. "Today's passage means we are one step closer to California college students being able to get the care they need right on campus without unnecessary barriers or delays."

justCARE: Campus Action for Reproductive Equity mobilizes students and allies across California to make the abortion pill on campus a reality. We envision a future where reproductive health services are available to all students who need them, wherever we live or go to school 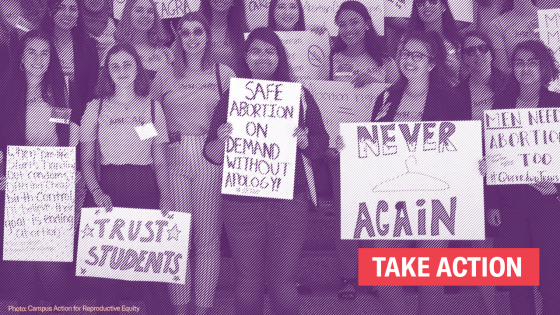