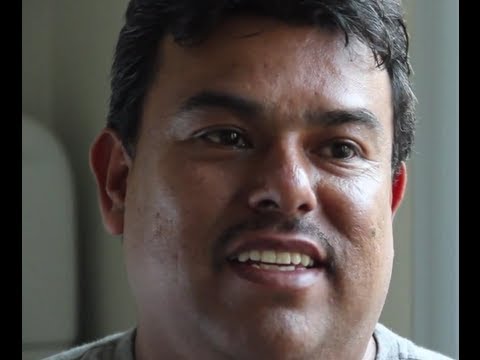 My name is Antonio Montejano. I am 40 years old. I was born in Los Angeles and I am an American citizen.
I live in Los Angeles with my wife and kids. My four kids are also American citizens and my wife has a green card. My oldest child is 22 and my younger kids are 3, 6 and 8. I supervise a construction site and have been with the same company for 17 years.
Like many people in Southern California, I have traveled to and from Mexico all my life with no problems. But in 1996, there was one time when my California driver’s license wasn’t enough to cross the border and I was detained. A judge then sent me to Mexico. That same day, I crossed back into America with no problems and have not had any problems ever again until earlier this month.
On Saturday, November 5th, I went with my wife and three kids to Sears in Santa Monica to go shopping for clothes and other things the family needed before the holidays.
While we were shopping, one of my kids asked if I will buy a 10 dollar bottle of perfume. I said sure. By accident, I put the perfume in a bag of merchandise that I had already paid for. During the few hours we were shopping, my kids also each took a candy bar off the shelf without asking my permission and began eating the chocolate. I’m sure many parents can relate to this. I saved the wrappers in my pocket to pay for the candy later.
Though I spent about 600 dollars at Sears that day, I forgot to pay for the candy when I checked out. And as I was leaving, the store clerk stopped me, and pulled out the perfume bottle. I realized my mistakes right then and offered to pay. Instead, they called the Santa Monica police.
When the police showed up, they said they had to arrest me and take me to the station for fingerprints. I didn’t want my kids to see me like that. I asked the police if they could tell my wife to take the kids home so that my kids won’t see me in handcuffs.
They took me to the Santa Monica police station. They charged me with petty theft.
I was detained in the Santa Monica police station for two nights until Monday, November 7. I pled to an infraction of petty theft. The judge said I did not have to pay the fine and ordered my release.
But instead of being released, the police transferred me to the L.A. County Sheriff. When I arrived at the Los Angeles County jail, an officer asked me where I was born and if I was citizen. I said I was born in Los Angeles and was an American citizen. They didn’t believe me, and they detained me on an immigration hold.
For two nights, they detained me in the Inmate Reception Center. There was no bed, no mattress, no blanket, only a short bench. I did not sleep the entire time. They held me there until the morning on Wed., Nov. 9, after the ACLU sent my passport and birth certificate to ICE. As soon as I got out of that cell, I went straight to work to make up the lost pay.
Those days in jail were some of the worst days of my life. I felt completely powerless. I told every officer that I was an American citizen, but no one listened. I felt that the only reason they ignored me was because of the color of my skin, because I looked like I was from another country. I am an American citizen, but they treated me like I did not belong.
During the days I was jailed, I could not go to work. Because I missed two days work, I lost two days in wages. My family lives paycheck to paycheck, and those lost wages hurt us, especially during these hard times.
I worried constantly about who will pay the bills when I was not working, and about who would drive the kids to school since my wife does not have a driver’s license.
When I was released, my 8-year-old son said to me: “Dad, can this happen to me too because I look like you?” I feel so sad when I heard him say this.
But he is right. Even though he is an American citizen -- just like me -- he too could be detained for immigration purposes because of the color of his skin -- just like me. This is why I am here to tell my story so my kids don’t grow up in an America where this can happen to them.
Thank you.
Related Issues