The detainment of L.A. handyman Edgar Solano was clearly a case of racial profiling

LOS ANGELES — The immigration agents who detained and handcuffed Edgar Solano as he waited for a bus in Indio knew only three things about him: his name, where he lived, and that he looked Latino. That was enough for them. But it's not enough for the Constitution.

The ACLU Foundation of Southern California and law firm Lucas & Barba LLP today filed a motion in U.S. Immigration Court in Los Angeles to halt deportation proceedings against Solano because he was unlawfully detained. The actions the agents took against him violated not only the Fourth Amendment to the Constitution, but also numerous regulations.

“This is not a totalitarian state where government agents can detain and handcuff people without lawful cause,” said ACLU SoCal staff attorney Eva Bitrán. “Mr. Solano’s case is one of many similar enforcement actions based on racial profiling that we’ve seen by Customs and Border Protection on Greyhound property.”

The incident occurred on January 11. Solano, who works as a handyman, has a wide-ranging set of clients and that day was doing a repair job in Indio. Because his car was out of order, he was traveling by bus and planned to take the 9:25 p.m. Greyhound home to Los Angeles. The bus was more than an hour late.

When the bus finally arrived, Solano stood in line to board. But two plain-clothed men approached him and asked him his name and where he lives. Solano answered truthfully. Then the men, who had not identified themselves, asked Solano to step out of line and show identification. He told them he would rather not — if delayed he would miss the last bus home for the night.

But one of the men ordered him out of line, took him by the arm and steered him toward an unmarked pickup truck in the parking lot as the other man motioned to the bus that it could leave. When they got to the truck, Solano’s hands were handcuffed behind him. Only then did the men identify themselves as immigration enforcement agents. They showed him badges reading, “Customs and Border Protection.”

At that point the agents had already violated the Fourth Amendment to the Constitution and regulations. Longstanding court rulings have held that immigration agents cannot detain a person without reasonable suspicion based on specific facts. Most importantly, the courts have ruled that the suspicion cannot be merely based on ethnicity.

A 1994 court decision involving Immigration and Naturalization Service agents is one of many cited in the ACLU motion. It states, “Allowing INS agents to seize and interrogate an individual simply because of his foreign-sounding name or his foreign-looking appearance risks allowing race or national-origin to determine who will and who will not be investigated.”

Under further questioning by the agents that night in Indio, Solano admitted he did not have papers authorizing his presence in the U.S. He was arrested and spent more than two months in a detention facility before getting a bond hearing.

But his initial detainment and arrest were unequivocally unlawful and should not be permitted to stand. The motion rightly asks the court to terminate deportation proceedings.

Read the motion at https://www.aclusocal.org/sites/default/files/solano_amended-motion-to_terminate-proceedings.pdf 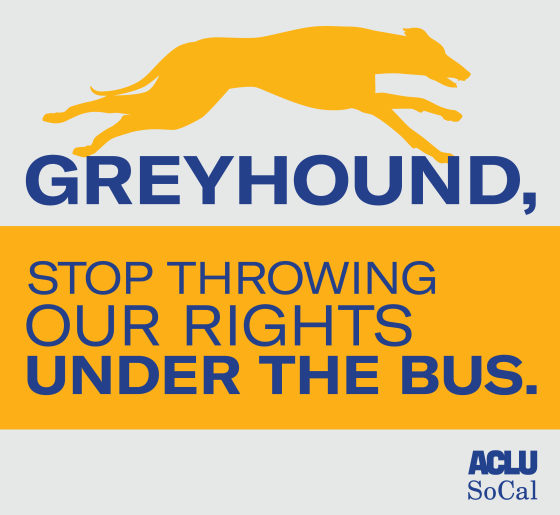 Greyhound Has a Choice on Warrantless Searches

ACLU: Volunteers to Give Greyhound Bus Passengers 'Know Your Rights...