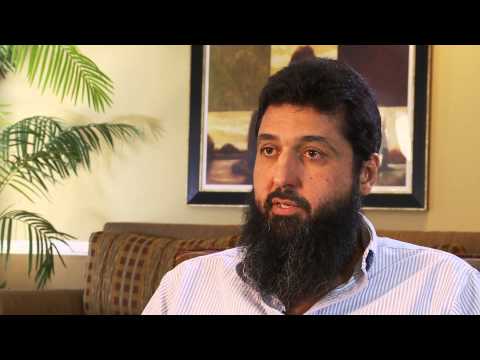 For many immigrants in this country, the chance to take the oath of allegiance to the United States and become sworn in as a U.S. citizen is a moment they dream about and work years to achieve. But for Tarek Hamdi and many other Muslim immigrants around the country, the dream is tarnished by racial and religious discrimination in the naturalization process.

Tarek, a 50-year-old man born in Cairo, Egypt, has lived in the United States since he was a teenager. Over the last three decades, he built what many would consider an ideal American life, marrying his American-born college sweetheart and raising four daughters, all U.S. citizens. He has a successful career as a civil engineer, has never been arrested or charged with a crime, and is a man of faith.

As a practicing Muslim, Tarek has stayed involved in his religious community and in accordance with the religious principle, zakat, regularly donates money to support humanitarian causes, both Muslim and secular, for those people he believes are most in need.

Tarek considers himself more American than Egyptian. Yet, despite the fact that he bears all of the qualifications for citizenship, having fully established that he is of "good moral character," our government treats him as suspect because of his religion, just like they have apparently treated so many other naturalization applicants who are Muslim or from Muslim countries.

Naturalization applications, like Tarek's, by law must be processed in six months but his stretched out for nine years. He endured endless scrutiny and frustrating delays because too many Muslim applicants are presumed suspects.

The U.S. Citizenship and Immigration Service (USCIS) finally denied his application, claiming that evidence from the FBI showed that he made a single donation to the Benevolence International Foundation (BIF) and thus failed to disclose his "association" with the charity on his application. Tarek donated that money to BIF in 2000, believing that they were providing important humanitarian relief around the world, two years before the charity was shut down by the Treasury Department as an alleged financier of terrorism. Tarek has no more association with the BIF than he does to the American Cancer Society, to whom he also donated money.

Tarek's story is unfortunately the story of far too many Muslim immigrants. In the Los Angeles Field Office, Muslim applicants appearing for their naturalization examinations are often asked detailed questions about their religion, including how often they pray and what mosque they attend — none of which is relevant to their eligibility for citizenship. They are singled out for lawful donations to Muslim charities and forced to respond to extensive "requests for evidence" reaching so far back that it is impossible to fully comply. Many are brow-beaten into becoming FBI informants in order to have their applications finally processed. And again and again, Muslim applicants are denied naturalization for bogus reasons.

Congress abolished racism from the naturalization process nearly 60 years ago, making the dream of citizenship possible, at long last, for all people, not just Western European immigrants and African descendants. In 1952, Congress proclaimed in the Immigration and Nationality Act that '[t]he right of a person to become a naturalized citizen of the United States shall not be denied or abridged because of race.'

While outright prohibited, racial and religious discrimination again infects the naturalization process, disparaging the very meaning of the Constitution to which many new Americans seek to pledge their allegiance. The ACLU of Southern California, together with the National Immigration Law Center and the Council on American Islamic Relations, filed a Freedom of Information Act request to uncover the USCIS naturalization policies predicated on racial, religious and national origin profiling. The ACLU/SC also filed a federal court lawsuit on behalf of Tarek Hamdi seeking that a judge finally restore his dream and decide on his "Americanness" based on the content of his proven character, not the color of his skin or the god to whom he prays.