In 2011, the ACLU of Southern California stood in solidarity, with millions of people across the country in demanding clemency for Troy Davis. But despite our appeal, on September 21, 2011, Troy was executed. 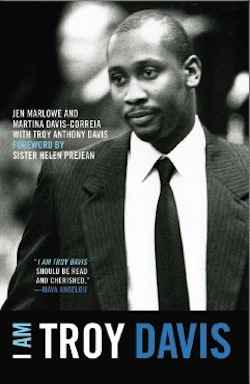 See Jen Marlowe, co-author of I Am Troy Davis, along with members of the Davis family on Saturday, February 21 at 4 p.m. at All Saints Church in Pasadena.

Two years later, our collective efforts to challenge the death penalty in the name of Troy Davis and others like him have been all but futile. Already, nine states have taken steps to repeal the death penalty. It’s time for California to join Washington, Oregon, Colorado and others in replacing the death penalty with justice that works.
Tomorrow, the ACLU of Southern California will co-sponsor, “We Are Still Troy Davis,” an event hosted by Death Penalty Focus and other ally organizations. The event will feature a panel discussion with members of the Davis family including Troy’s sister, Kimberly Davis, as well as Jen Marlowe, author of the recently released book, I Am Troy Davis.
Ahead of this weekend’s event, we caught up with Jen and Kimberly:
ACLU of Southern California: Where are we two years after Troy’s execution?
JM: Troy’s case really sparked an awareness about why the death penalty is so problematic in this country, and I think in the two years since there’s been a lot of really concrete steps that have happened that have moved our country progressively away from use of the death penalty – and certainly, I can’t say that that’s only because of Troy, it’s obviously not, but I absolutely think it was one of the galvanizing events in the abolition movement. That was one of the things he called on his supporters to do in his final words – he asked us to continue to fight this fight, and I think that he would find that we have, and that we’ve been very successful in it.
KD: I feel really good knowing that my brother's case is continuing to change the world today. Troy told the family if the State of Georgia did succeed in executing him they would only take his physical body because he gave his soul to God along time ago.
ACLU SoCal: How have people responded to your brother’s story?
KD: My brother's story has opened the eyes of many people across the world and has brought people of all origins together to work for one cause: to end the death penalty. It doesn't matter the color of someone’s skin—we all came together to stand for one cause and continue to stand for that cause. People all over the world had their eyes on Troy's case and if they didn't understand the importance on ending the death penalty then, their eyes are opened wide now.
ACLU SoCal: How does the death penalty affect minorities and people of color?
JM: The death penalty disproportionately affects minorities and people of color. Every study that’s been done in every state has affirmed that. It has to do with both the race of the perpetrator and the victim, as people of color are far more likely to be prosecuted with a capital charge than people not of color.
The race of the victim particularly impacts whether a death penalty is sought for an offender. If the victim is white, it is far more likely than if the victim was non-white. These are some really troubling indicators in this day and age of whose lives are considered more valuable and whose lives are more dispensable. Race and the death penalty have very troubling overlays, as do economics and whether or not someone has the opportunity to hire decent defense or has a public defender, who might be very good but nevertheless overworked and underfunded.
The nature of the crime is rarely what determines whether the death sentence is sought. Race, geography, and poverty are much more indicative factors, and that’s really troubling in the country that is supposed to stand by the central edict ‘equal justice under the law.’ The death penalty seems to be the sharp edge of a much larger, broken system, and it certainly does not provide equal justice.
ACLU SoCal: So in terms of concrete policy, what are we building up to?
JM: I think we’re building up to a repeal of the death penalty in the United States. It’s been happening step-by-step and state-by-state – momentum is growing and I think we’ll reach a tipping point, where as we continue to move, there will be a point where the rest of the country will follow – whether that will ultimately come from the U.S. Supreme Court or another way, we’re trending very clearly in that direction. In terms of repeal on different state levels, I live in Seattle – of course, the governor of Washington just did the moratorium – and then also if you just look at trends about the death penalty: prosecutors are seeking the death penalty less often, there’s fewer death sentences being imposed, there’s fewer executions, public opinion of the death penalty is at an all-time low according to Gallup – every single indicator is moving towards repeal, which is not to underestimate the amount of work that we have ahead of us.
ACLU SoCal: Kimberly, what changes do you hope to see?
KD: I hope to see the death penalty end all around the world and that we can come together to make sure there is not another innocent man executed. Not in my name.
See Kimberly Davis, Jen Marlowe, other members of the Davis family and community advocates speak about the state of the death penalty in the country and in California on Saturday, February 21 at 4:00 p.m. at All Saints Church in Pasadena. The event is free and open to the public.
Related Issues