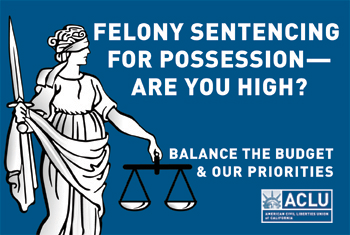 California is in a serious crisis, with the state budget deficit at a staggering $15 billion. To balance the budget, we need to balance our priorities. California is slashing funds for education and health care, while billions in prison spending remains untouched.

As the crisis intensifies even further, elected officials have a responsibility to make the most effective use of our public safety resources. It's time for California to stop spending unnecessary millions to incarcerate people who pose no threat to public safety. Prison should be for serious crimes.

The ACLU of California is asking the Governor and our legislators to enact two simple reforms in the May revise budget that would save Californians hundreds of millions of dollars annually:

These reforms would help to bring back balance to our sentencing laws, so that the punishment fits the crime. In addition to making the system fairer, sentencing reform will yield substantial savings because felonies involve higher court costs and result in lengthier periods of incarceration than misdemeanors. These savings would make implementation of the Governor's realignment plan less costly, allowing local authorities to direct the money saved to fund rehabilitation, drug treatment, and other proven strategies for reducing crime.

According to a new poll solid majorities of Republicans, Democrats and Independents from every corner of the state believe that too many people are imprisoned and that penalties for minor offenses are too harsh. Nearly three-quarters (72%) of likely voters support reducing the penalty for simple possession of a small amount of drugs for personal use.

A truly balanced budget is one that balances cuts to wasteful spending on corrections with cuts in other areas.

It's time to balance our priorities as we balance the budget.