Prop 47, fear-based politics, and the mandate for sentencing reform

The votes have been tallied and Proposition 47, the Safe Neighborhood and Schools Act, won by a landslide – the margin was 17 points. Nearly 60 percent voted in favor of this modest yet impactful reform to our state's approach to criminal justice.

The overwhelming margin of victory for Prop 47, despite vehement opposition from the law enforcement lobby, one of the lowest voter turnouts in a mid-term election in California history and a voting electorate that skewed conservative as a result, sends a loud message. The question is whether our political leaders in Sacramento are listening. 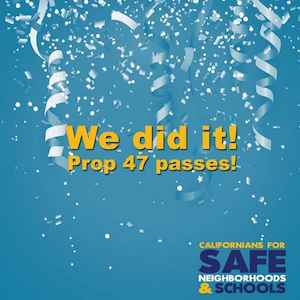 The Prop 47 victory is a repudiation of four decades of tough on crime policies, and marks the end of the era of politics of fear. Voters want smart criminal justice strategies and recognize that longer sentences, especially for low-level, nonviolent crimes, have not made our communities any safer.

California's recidivism rate, one of the highest in the country, is perhaps the best indicator of the degree to which the state's harsh sentencing laws have utterly failed to keep any of us safe over the past 40 years of prison and jail expansion, constantly ratcheted-up punishment and the abandonment of even a pretense of rehabilitation as a component of criminal justice.

It's a shame that we had to take this issue directly to the voters via the ballot initiative. With such broad public support, it shouldn't have been necessary. But for far too long, the politics of fear and the power of the law enforcement lobby have dominated Sacramento.

Sen. Mark Leno (D-San Francisco) tried twice in recent years to pass bills similar to, though much more moderate than, Prop 47. But Leno was unable to get a bill reducing the penalty for simple possession of drugs from a felony to a misdemeanor out of his own chamber due to the opposition of the statewide associations of sheriffs, police chiefs and district attorneys. When he brought back a compromise bill that reduced that same offense to “a wobbler,” leaving prosecutors the discretion to charge it as either a felony or a misdemeanor, the bill was vetoed by Gov. Jerry Brown, again at the behest of those same law enforcement special interests. And thus was Prop 47 born.

Lawmakers must abide by the will of the people

It's time for our political leaders to stand up to the law enforcement lobby and enact the smart, sensible reforms the public supports. The legislature and the governor should work together to ensure that Prop 47 is implemented in an honest, timely manner, and should rebuff any law enforcement attempts to divert the money earmarked for rehabilitation and treatment instead to still more jail construction – as many counties were unfortunately permitted to do with Realignment dollars.

It's time for a comprehensive review of our penal code and sentencing laws, starting with the intricate web of sentencing enhancements that the Little Hoover Commission investigated in 2007 and declared “complex and confusing”, with over one hundred enhancements strewn throughout more than 20 separate statutes. Perhaps it's time for a sentencing commission, though advocates rightfully worry that unless it's composed fairly with diverse representation, and not controlled by the same law enforcement interests that have stymied reform for decades, a commission could do more harm than good, and become the final resting place for great ideas never implemented.

Whether by commission or otherwise, though, it's time for a serious look at sentencing laws in California with an eye toward real reform and the same investment in innovation that drives our technology sector. And it is time to end, once and for all, the era of the politics of fear.