Our Democracy Needs Everyone, Including People on Parole

By Brittany Stonesifer, Voting Rights Attorney with ACLU of California

After a parole board granted Richard Mireles his freedom earlier this year, he was shocked to learn that he still couldn't cast a vote in California, the state he had lived in since he was born. Just three months shy of his 21st birthday, a court gave Richard a life sentence on his first felony case. In the two decades of his incarceration, Richard worked hard to change his life. He got sober, worked to heal past traumas, earned his college degree and numerous commendations, and was even found suitable for release at his first parole hearing. It didn't seem right that California would continue punishing him after his release by denying him one his most fundamental rights of citizenship.

Like Richard, many people come home after finishing a prison term only to face a maze of obstacles as they work to reintegrate into the community. Among these obstacles are the alienation, confusion, and fear felony disenfranchisement laws cause. More than 4.5 million U.S. citizens are currently denied the right to vote because of a past conviction, and potentially millions more do not vote because they mistakenly believe that they cannot.

That's why Richard and many thousands of people have been advocating for ACA 6's passage.

If the California Legislature passes and California voters approve it, ACA 6 would help restore voting rights for almost 50,000 Californians. Doing so would go a long way toward reversing policies that have disproportionately and purposefully excluded people of color from the electoral process. Three out of four Californians who would regain the right to vote if ACA 6 passes are non-white. On average, Black American adults are more than four times as likely to lose their voting rights than the rest of the adult population.

That's no accident. California suppresses Black and brown votes by design. After the Civil War, California refused to ratify the 15th Amendment, which prohibits voting restrictions based on race. Instead, California enshrined felony disenfranchisement into our state's constitution, relying on discriminatory policing and incarceration to lock people of color out of the ballot box.

Silencing the voices of people with convictions weakens the democratic system of government that belongs to all of us — regardless of our race or ethnicity. When formerly incarcerated people can't vote, all of us miss out on the perspectives and experiences they can offer our country's political conversation. After all, those closest to the problem are generally closest to the solution.

Several other states have already taken steps to end voter suppression laws and policies targeting returning citizens. In just the last year, New York, Florida, Louisiana, Nevada, and Colorado have all taken steps to re-enfranchise thousands of citizens with criminal convictions. Since 1997, at least 24 states have made similar progress. It's time California caught up.

Over the last 20 years, Richard has become what he describes as "a man built for others" — helping develop a drug and alcohol counseling program while still in prison, hosting a podcast to share the transformational stories of individuals impacted by incarceration, and advocating for more fair criminal justice policies. "I work hard, serve my community, pay taxes, give back, and I am still a citizen of this country," Richard said. "I believe that qualifies me to have the right to vote again."

Stand with Richard: ask you state lawmaker to vote YES on ACA 6.

ACLU is part of Free the Vote California, a coalition of organizations co-sponsoring ACA 6. 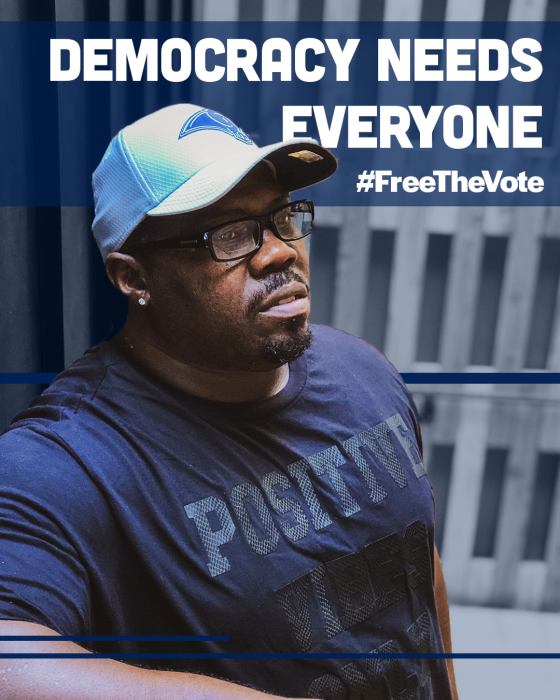