A Moral Rot Among Riches: The UN investigates homelessness and poverty in the U.S. 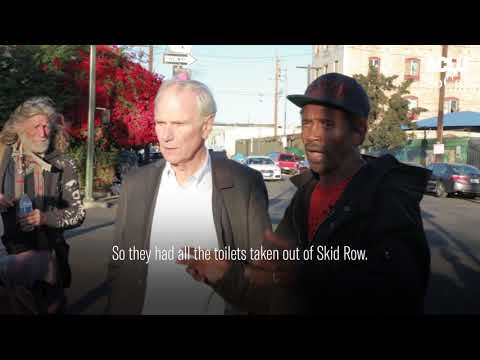 Philip Alston, the​ United Nations Special Rapporteur on Extreme Poverty and Human Rights, travels the world to investigate horrific living conditions. On a recent fact-finding trip, he found people barely surviving in vermin-infested homeless encampments, a devastating scarcity of affordable housing and municipalities that make it a crime to be homelessness, as if that could be a cure. He even spotlighted the fact that dental care was so scarce for the poor that he saw people who had lost all their teeth.

But Alston was not reporting on a so-called third-world country. His blistering report was the result of his visits to several parts of the United States, including Southern California.

“Instead of realizing its founders’ admirable commitments, today’s United States has proved itself to be exceptional in far more problematic ways that are shockingly at odds with its immense wealth and its founding commitment to human rights,” Alston said in a statement last month. “As a result, contrasts between private wealth and public squalor abound.”

Alston’s full report will not be issued until the spring, but his 14-page statement presented after his U.S. fact-finding tour painted a portrait of a nation in the grip of a moral failure that threatens to undermine its democracy.

He put the blame squarely on public officials who engage in a “dual narrative” about American society in which “the rich are industrious, entrepreneurial, patriotic and the drivers of economic success. The poor are wasters, losers and scammers.”

It’s a narrative that has justified deep cuts in aid programs, pushing more and more people into extreme poverty and homelessness, while funneling billions to those atop the economic ladder. The attitude spreads like a contagion in the hearts and minds of ordinary people who, having absorbed this hateful message, respond to poverty and homelessness with a hardened heart rather than empathy and moral outrage.

Alston was especially disheartened by conditions on Skid Row in Los Angeles only blocks away from million-dollar condos. “Homelessness on this scale is far from inevitable and again reflects political choices to see law enforcement rather than low cost housing, medical treatment, psychological counseling and job training as the solutions,” he said. “But the futility of many existing approaches was all too evident as I walked around some of the worst affected areas.”

While in L.A., he also heard from several civil society organizations in a forum organized by the ACLU of Southern California. Some representatives of these groups spoke of municipalities in wealthy Orange County enclaves where the innocent act of sleeping or resting in public has been criminalized, even when people literally have nowhere else to go.

As the result of these “crimes,” municipalities extract money in the form of fines, fees and bail, forcing people to subsidize the apparatus that oppresses them. That is, if they can pay — many are simply thrown into an endless cycle of debt and jail time.

Our political leaders on both sides of the aisle have, for the most part, either avoided the topic of poverty or engaged in cynical hate speech that dehumanizes and blames poor people for the deprivation they experience. Alton’s statement makes an impassioned argument that ending poverty and protecting the basic human rights of people in the U.S. will require a moral reckoning.

“Rather than responding to homeless persons as affronts to the senses and to their neighborhoods,” he said, “citizens and local authorities should see in their presence a tragic indictment of community and government policies.”

How we respond to these issues going forward will tell us much about the nation. And now, with even the U.N. involved, the whole world is watching.