Los Angeles Mayor Eric Garcetti: "We are a city of sanctuary..." [VIDEO]

Mr. Vayeghan, an Iranian citizen with a valid U.S. visa, had arrived last Friday at LAX from Tehran only to be detained overnight by U.S. Customs and Border Protection and be forcibly removed from the country, after President Trump's executive order banned travel from Iran and six other Muslim-majority countries.

Yesterday, Mr. Vayeghan was greeted by his brother Hossein Vayghan, his niece Marjan Vayghan and civil rights and immigration advocates, who have been fighting for Mr. Vayeghan and others under attack by the president's executive orders. Mayor Garcetti stood next to the Vayghan family, and in his remarks said for the first time: “We are a city of sanctuary, a city of refuge.” 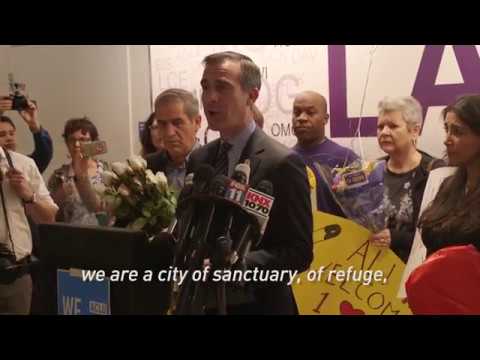 This came a day after the president's executive orders on border and interior immigration enforcement. The city's lack of urgency and action since the president's election last November has been a great cause of concern and indignation among community members directly impacted by his unconstitutional and un-American agenda.

Now that Mayor Garcetti has finally recognized that L.A. must be a sanctuary city, he must work diligently with directly-impacted communities.

Together, we must ensure that the people’s definition of sanctuary—a place where every person, regardless of race, immigration status, religion, gender identity or sexual orientation, feels safe from government discrimination, violence and violations of our constitutional rights.

This commitment must be fully memorialized in the laws and policies of the city to ensure L.A. is truly a sanctuary for all.

Ameena Mirza Qazi is executive director of the National Lawyers Guild - Los Angeles and board member of the ACLU of Southern California.​