'Her' is Oscar nominated – Why isn’t she?

Hollywood's annual awards season culminates with the Academy Awards, a night honoring the best films and performances of the year. This year, all five directors nominated for the Best Director award are men. Last year, all the nominees were men. In fact, a woman hasn't been nominated for Best Director since 2010, the year that Kathryn Bigelow took home the honor for directing The Hurt Locker. Bigelow is the only woman to have ever won the award, and she is one of only four women who has ever been nominated for it in the Academy Awards' 86 year history.
The lack of female director Oscar nominees is no accident. The number of women employed behind the camera in film and television is far too few in comparison to the number of employed male directors and to the number of women seeking work. Women made up 6 percent of all directors that worked on the top 250 domestic grossing films of 2013, and 14 percent of directors on television shows during the 2012-2013 season.
These numbers do not mean that talented female filmmakers do not exist or that women don't want to make films. They do reflect that women face persistent gender discrimination within the industry. Nevertheless, incredible women filmmakers are out there. Just this past weekend, the Athena Film Festival, which celebrates the achievements of women in film, took place at Barnard College. The Festival's events included panel discussions with directors, workshops for filmmakers, and screenings of documentaries, feature films and shorts created by and/or starring women.
I attended director Lexi Alexander's discussion of the ways in which women are excluded in Hollywood. This event was a continuation of the conversation she started a few weeks ago in her viral blog post that exposed some of the problems faced by women in the industry, including: discriminatory hiring practices, inequitable movie and advertising budgets, and lack of mentorship opportunities. She was candid about the sexism she's encountered as a woman director. During her talk, it was clear that she was not alone in her experience or in her willingness to speak up; many courageous women came forward to share their stories of trying to find work in an industry dominated by men. 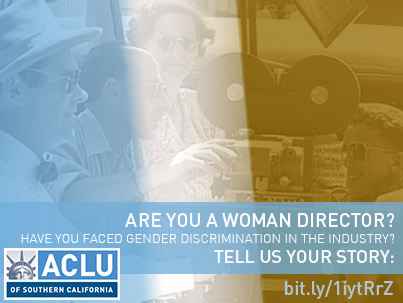 So what can be done to increase the numbers of women in film and television? For starters, we can continue the conversation about what's happening to women in Hollywood. Further, we must recognize that the gender inequality in film goes beyond just percentages. Real, creative, talented women report consistently being denied job opportunities within a major industry. Putting a human face on the problem, like Lexi Alexander and others who are speaking out, will inspire change. Are you a director who has faced discrimination? Tell us your story.
This blog is cross-posted from ACLU National. Emily Carter is legal assistant for the Women's Rights Project at the ACLU.