The lawsuit was filed on behalf of two named plaintiffs, Alex Rosas and Jonathan Goodwin, who were savagely beaten and threatened with violence by deputies of the Los Angeles County Sheriff’s Department (L.A.S.D.) while they were pretrial detainees in the jail. As detailed in the complaint, the treatment of Rosas and Goodwin is not isolated – there are dozens of reports of similar brutality in the jails. The lawsuit seeks both injunctive and declaratory relief on behalf of all present and future inmates of the jails.

“Sheriff Lee Baca, Undersheriff Paul Tanaka, and Chief Dennis Burns are responsible for ensuring that their subordinates do not engage in a pattern of unspeakable acts of violence against inmates,” said Peter Eliasberg, legal director of the ACLU/SC. “But in the face of a longstanding pattern of deputy abuse they have deliberately and knowingly failed to put in place the basic pieces of an accountability system – sound policies on the use of force, adequate training, careful investigation of force incidents and a rigorous system of discipline. This suit is directed at them because they have allowed deputies to go unpunished, covered up their behavior and for years made no effort to reform this broken system.”

Los Angeles County has the largest jail system in the nation, with an average daily population of 15,000 inmates. The lawsuit, filed in U.S. District Court for the Central District of California, charges that Baca and his command staff had full knowledge of this pattern of violence, and sought to conceal it from the public. The suit alleges violations of the inmates’ rights under the Eighth Amendment to the U.S. Constitution to be free of cruel and unusual punishment, and pretrial detainees’ rights under the Fourteenth Amendment’s prohibition of punishment prior to conviction. 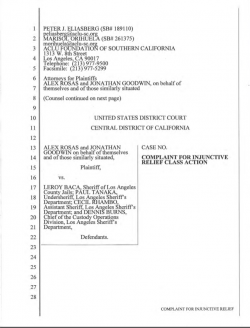 “A sick culture of deputy-on-inmate hyper-violence has been flourishing for decades in the darkness of the L.A. County Jails, and this lawsuit will continue to help expose that culture to the light of day,” said Margaret Winter, associate director of the ACLU National Prison Project. “Because Sheriff Baca has recently taken an important first step -- publicly admitting there’s an enormous problem and expressing his commitment to reform -- we hope the sheriff and the ACLU will be able to reach a court-ordered injunction that will bring about profound and far-reaching changes.”

In September 2011, the ACLU issued a report documenting more than 70 recent cases of extreme deputy violence, and shortly thereafter the public learned the FBI had launched a far-reaching criminal probe into deputy-on-inmate violence in the county jails. In December 2011, the county Board of Supervisors convened a commission to investigate and make recommendations.

In addition to ACLU lawyers, a team of Paul Hastings attorneys led by Donna Melby and John Durrant will provide pro bono legal assistance to the plaintiffs in this case.

“We are honored to partner with the ACLU in bringing this worthy lawsuit,” said Durrant. “What we are talking about here goes well beyond having a ‘tough’ jail. There is a well-documented, chronic problem of brutality in the jails that must be redressed.”

To view complaint go to: www.aclusocal.org/rosas.