By: Jennie Pasquarella
See the list of remaining counties that have yet to provide information about whether or not they honor ICE holds.
When the federal government’s signature deportation program “Secure Communities” was green-lighted in California in 2009, county and city jails went from places that housed people accused or convicted of a crime to places that also warehoused individuals for days, weeks or sometimes months without legal cause. 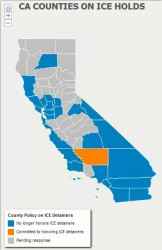 CA Counties Interactive Map: See which counties have said "no" to ICE holds.

How did this happen? Thanks to Secure Communities, federal immigration officials began issuing requests, also known as "detainers," to local law enforcement officials to hold individuals while U.S. Immigration and Customs Enforcement (ICE) investigated whether they could be deported for civil immigration violations.
If this sounds wrong, it is. These so-called detainers violate a basic constitutional protection afforded to everyone. The Fourth Amendment prohibits law enforcement from detaining someone simply to investigate whether they’ve done something wrong; they must first have probable cause to believe the person committed a crime, or, in this case, are subject to deportation. And if they are arrested without a warrant, the Fourth Amendment requires they be brought before a judge within 48 hours for a probable cause determination. Yet, none of that happens here: they are detained for investigatory purposes, and they never get a hearing before a judge while they are held for ICE.  That’s why we brought lawsuits against Los Angeles County in 2012 and ICE in 2013 to stop these unlawful detentions.
Detaining people by the droves without justification in some of the worst jails in America, like those in L.A. County, is bad enough. But it gets worse. ICE consistently has said that it was using the Secure Communities program to identify “serious criminals” in our communities for deportation. But the federal government's own statistics call such claims into question.
Indeed, the vast majority of people for whom ICE issued holds were people who were not deportation priorities.  More than half of people in California who have received immigration holds had no criminal history at all.  And, nationally, four out of five either had no criminal history or had been convicted only of minor misdemeanor offenses, such as traffic offenses.  Many of these people have stronger ties to the U.S. than they do to their home counties and would likely have benefited from immigration reform, if and when reform comes – like my client Isaura Garcia, a domestic violence victim with a young child, who was arrested in a mix-up after calling 911 for help and detained on an immigration hold, or my client Ruth Montaño, whom Kern County Sheriff’s officers arrested and subsequently detained on an immigration hold for having a chihuahua that allegedly barked too loud.
Moreover, ICE’s misguided policy of detaining people first and investigating later, has led to the unlawful detention of U.S. citizens such as our clients Gerardo Gonzalez, Simon Chinivizyan and Antonio Montejano, or individuals who have lawful immigration status and are not subject to deportation.
Thankfully, counties throughout California and the nation are beginning to question the federal government's use of detainers.
In fact, in the past month, law enforcement agencies across the state have started to say “no” to warehousing people in their jails solely for deportation purposes.  These decisions follow in the wake of federal court rulings that held that immigration holds are voluntary and that they are not supported by probable cause. We need every law enforcement agency in the state, including county sheriff’s departments and city police departments, to stop participating in these unlawful and burdensome detentions. Check our statewide map to find out if your county has said “no," and find the list below of the remaining counties that have not yet provided information about whether or not they honor ICE holds.

Jennie Pasquarella is staff attorney at the ACLU of Southern California.