“Each and every day, we have thousands of people who are deported from this country. We fight against deportations, because deportation destroys families,” said Angelica Salas, executive director of the Coalition for Humane Immigrant Rights of Los Angeles (CHIRLA), outside the Twin Towers Correctional Facility in Los Angeles on Thursday, June 13.

The ACLU of Southern California stood with CHIRLA and Southern Californian families to protest the unfair immigration practices towards aspiring citizens.
More than 250 community members participated in the march and rally, which began at the Los Angeles Metropolitan Detention Center and ended in a press conference outside the Twin Towers.
The protesters embraced, linked arms, and bowed their heads as Father Richard Estrada led the rally with a prayer for social justice. Lesly Cruz, a mother of a two-month-old baby, spoke about her husband’s unjust arrest for street vending and who is now facing deportation; while Carlos Olivarez of CHIRLA recounted how his father was deported from the US two years ago.
Present at the rally were fathers, mothers, partners, and children of individuals being detained by local law enforcement and U.S. Immigration and Customs Enforcement (ICE).
“It is past time to close down the worst immigration detention centers in the county and treat detention as the last resort rather than throw immigrants in jail-like conditions – including individuals who have been here for years, those who have only committed minor violations, those who have children who are US citizens, and those who have claims to remain in the United States,” said Clarissa Woo Hermosillo, Director of Policy Advocacy at the ACLU/SC, during the rally. See her full speech: 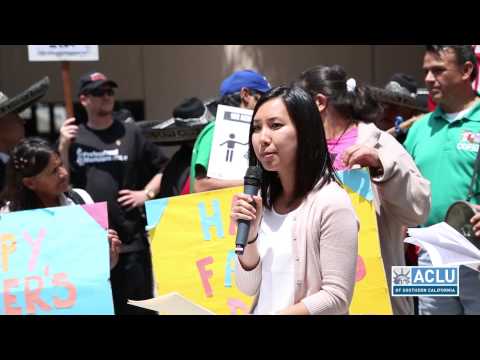 View photos from the Father's Day Rally
The ACLU of Southern California helped the rally host, CHIRLA, make posters for the event. We met students whose families were directly affected by the immigration laws. Despite the restraint that our government imposes on these American families, they continue to support the American justice system and exercise their rights to protest and assembly for immigration reform.
Before the Twin Towers, where detainees cast shadows against the edifice’s perforated windows, the marchers cheered in unison: “Father, can you hear me?”
Though a Mariachi band in full regalia played throughout the event, the overall tone was somber and urgent, highlighting the sad truth that broken immigration laws are splitting families apart and the need for comprehensive immigration reform (CIR) is essential.
Learn about ACLU of CA-supported state immigrant rights bills:
AB 4 Secure Communities - TRUST Act
This bill sets a clear statewide standard for local governments not to submit to Immigration and Customs Enforcement’s (ICE) request to detain an individual unless the individual has a serious or violent felony conviction.
AB 60 Driver’s Licenses for “Undocumented Persons”
This bill will allow “undocumented persons” to obtain driver’s licenses. It authorizes a driver's license applicant who is not eligible for a social security account number, but who provides proof of identity to receive an original driver's license, if he or she meets all other qualification for licensure.
Both AB 4 and AB 60 passed the Assembly floor in May 2013, and are pending to be voted on in the Senate.
Know Your Rights: Regardless of your immigration status, everyone has fundamental rights in America. Read more: English » | Spanish »
Posted by Jason Liu, Community Engagement and Policy Advocacy Intern; Video by Joshua Cahn, Strategic Partnerships Intern
Related Issues