The forties saw new assaults on civil liberties in California, brought on by America's entrance into World War II. History has shown that the rights of minorities are always most threatened in time of war, when the majority itself becomes fearful. This was true of World War I, which saw the birth of criminal syndicalism legislation, and it was equally true of the second world war, when over a hundred thousand Japanese Americans were interned in concentration camps. 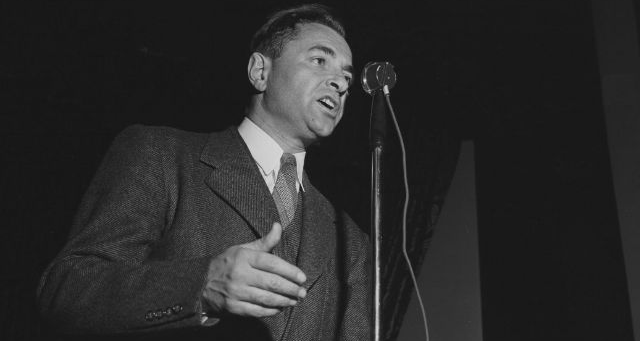 Throughout the forties, the ACLU of Southern California went to court again and again to fight government persecution of Japanese Americans. We lost when the Supreme Court upheld the validity of the Japanese curfew and evacuation orders, but won when we defeated efforts to strip Japanese Americans of their US citizenship. We got the courts to recognize the right of Japanese Americans to hold civil service jobs, and finally, in 1949, to rule that Japanese Americans who renounced their citizenship at the Tule Lake Relocation Center had done so under duress and were therefore still US citizens.
But the wartime climate of fear and repression did not dissipate with the end of the war— if anything, it worsened as we entered the McCarthy era. Even the National ACLU began to falter in its dedication to free speech — uncertain whether Communist speech merited Constitutional protection. The ACLU of Southern California stayed true to its radical roots, however, and took strong exception to the National ACLU's position endorsing federal loyalty oaths.
The ACLU of Southern California represented professors drummed out of the classroom for refusing to sign loyalty oaths – including our soon-to-be director, Eason Monroe – and appeared in court on behalf of the accused in untold loyalty oath cases. We fought for the rights of the Hollywood Ten, a group of screenwriters and producers called before the House Un-American Activities Committee for suspected Communist activity. The fruits of these labors came in the sixties, when the California Supreme Court struck down the loyalty oath enacted into our constitution during McCarthy's reign.
Our history of advocating for the rights of racial and ethnic minorities in California is as long as the history of our affiliate, and our motto, first espoused in 1926, has always been that "a threat to any minority is a threat to all minorities." In 1945, we successfully litigated against schools segregating Mexican-American children in Orange County.
Throughout the forties and fifties we filed a massive number of cases seeking to strike down the vicious racially-restrictive covenants which had been imposed on residential property after the Second World War. In the course of our history, we have occasionally been required to defend the expression of views we condemn.
In 1945, for instance, Wirin successfully defended the right of a renowned anti-Semite to speak at a public meeting in Los Angeles. The night of the speech, he was first in line to picket the event. Wirin explained to a reporter that "the rights of all persons are wrapped in the same constitutional bundle as those of the most hated members of society."