VICTORY! US Supreme Court invalidates patents on BRCA1 and BRCA2

Should companies be able to patent human genes? Today, the Supreme Court answered that profound question with a resounding NO. 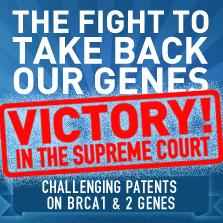 Seems like common sense, right? But over the last 30 years, the U.S. Patent Office has issued patents on thousands of human genes, including genes associated with colon cancer, Alzheimer's disease, muscular dystrophy, and many other devastating diseases. The status quo meant that companies controlling gene patents had the right to stop all other scientists from examining, studying, testing, and researching our genes.
The case before the Court involved patents on two genes, BRCA1 and BRCA2, controlled by a Utah-based company named Myriad Genetics. We all have these genes, but people with certain mutations are at much higher risk of breast and ovarian cancer. It is therefore crucial for some people to have their genes tested in order to make informed medical decisions (as Angelina Jolie described in her recent op-ed). But the patents on the genes allowed Myriad to exercise a monopoly, dictating what types of testing were offered, at what cost, and the availability of second opinions.
Myriad argued that the genes become its "invention" once they are "isolated," or removed from the cell and body.
The Court rejected that view in a unanimous decision written by Justice Thomas:
"Myriad did not create anything. To be sure, it found an important and useful gene, but separating that gene from its surrounding genetic material is not an act of invention."
The ruling should also impact the many other patents that were granted on "isolated" genes.
By invalidating these patents, the Court lifted a major barrier to progress in further understanding how we can better treat and prevent diseases. And in fact, the decision will help, not hinder, the biotechnology industry. Most of the industry is focused on using genes as a starting point to create new tools, tests, and therapeutics. While all of these applications could be patented, the genes themselves should remain in the public storehouse of knowledge, for scientists at universities and corporations to freely study and use. A federal task force advising the Department of Health and Human Services also concluded in 2010 that gene patents were not necessary as an incentive to finding genes, or providing genetic testing.
We also argued to the Court that a form of DNA, called complementary DNA ("cDNA"), should not be patentable when it is a mirror copy of naturally-occurring human mRNA. The Court concluded otherwise in its decision today. While we disagree with that finding, the decision as a whole represents a huge shift in patent law. The Supreme Court's ruling shields parts of the human body from the assertion of private property rights. And because cDNA is not required for genetic testing, laboratories will now be able to offer testing of the BRCA genes to their patients.
We celebrate the Court's ruling as a victory for civil liberties, scientific freedom, patients, and the future of personalized medicine. It also demonstrates the power of creating alliances and fighting for the public interest. The ACLU and the Public Patent Foundation filed the case four years ago on behalf of twenty plaintiffs, including organizations representing over 150,000 medical professionals, geneticists, breast cancer and women's health advocacy groups, and patients. Few thought we had a chance against the decades-long Patent Office practice as well as the entrenched industry position. But litigation can be a strong tool in producing change, never more than when diverse communities come together. Here, the medical, scientific, and patient communities united, and were soon joined by many others, eventually including the U.S. government. We honor the contributions everyone made to our success today.
Reposted from ACLU, by Sandra S. Park, ACLU Women's Rights Project
Related Issues