In the wake of the past week's revelations about the NSA's unprecedented mass surveillance of phone calls, today the ACLU filed a lawsuit charging that the program violates Americans' constitutional rights of free speech, association, and privacy. 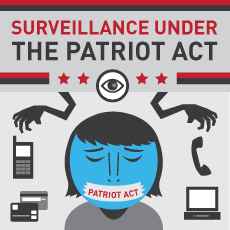 This lawsuit comes a day after we submitted a motion to the Foreign Intelligence Surveillance Court (FISC) seeking the release of secret court opinions on the Patriot Act's Section 215, which has been interpreted to authorize this warrantless and suspicionless collection of phone records.
Last week, The Guardian released an order issued by the FISC that compelled a Verizon subsidiary—Verizon Business Network Services (VBNS)—to hand over, on an "ongoing, daily basis," details for every phone call placed on its network for a prospective three-month period. Collecting those details—"metadata" that reveals who people talk to, for how long, how often, and possibly from where—allows the government to paint an alarmingly detailed picture of Americans' private lives. The FISC order cited Section 215 as its legal basis, yet the breadth of the authority it granted to the government is simply incompatible with the text of the statute.
As an organization that advocates for and litigates to defend the civil liberties of society's most vulnerable, the staff at the ACLU naturally use the phone—a lot—to talk about sensitive and confidential topics with clients, legislators, whistleblowers, and ACLU members. And since the ACLU is a VBNS customer, we were immediately confronted with the harmful impact that such broad surveillance would have on our legal and advocacy work. So we're acting quickly to get into court to challenge the government's abuse of Section 215.
The ACLU's complaint filed today explains that the dragnet surveillance the government is carrying out under Section 215 infringes upon the ACLU's First Amendment rights, including the twin liberties of free expression and free association. The nature of the ACLU's work—in areas like access to reproductive services, racial discrimination, the rights of immigrants, national security, and more—means that many of the people who call the ACLU wish to keep their contact with the organization confidential. Yet if the government is collecting a vast trove of ACLU phone records—and it has reportedly been doing so for as long as seven years—many people may reasonably think twice before communicating with us.
The kind of personal-data aggregation accomplished through Section 215 also constitutes an unreasonable search and seizure under the Fourth Amendment. Last year, in a case on GPS tracking by police, five members of the Supreme Court indicated support for the common-sense notion that government collection of individual bits of seemingly innocuous personal information over a long period of time could amount to such a complete invasion of privacy that it would be unconstitutional. The surveillance program that came to light with the release of the FISC order constitutes precisely that kind of unreasonable incursion into Americans' private lives.
Finally, the ACLU's complaint charges that the executive branch's use of Section 215 violates the plain language of the statute itself. The statute requires that records seized under its authority be "relevant" to an authorized foreign-intelligence or terrorism investigation. But while that language imposes a real limitation on when the government can use Section 215, the FISC order covering all VBNS customers demonstrates that this "relevance" restraint is shockingly inadequate. Similarly, the FISC order shows that the government—with the FISC's secret approval—is acquiring future records of telephone subscribers based on the same "relevance" requirement, even though the statute uses words that clearly show it was only meant to cover "tangible things" already in existence.
With today's lawsuit, the ACLU is now attacking Section 215 on three legal fronts: in our ongoing FOIA litigation seeking the government's secret interpretation of the law; in the FISA Court through yesterday's public-access motion; and now, in a constitutional lawsuit in federal court. When the government is claiming such chillingly expansive surveillance powers, it's all hands on deck. Stay tuned.
Reposted from ACLU National, by Brett Max Kaufman, Legal Fellow, ACLU National Security Project
Related Issues