By Maya Ingram, Legislative Attorney at the ACLU of California

Living in California is already expensive enough for working families — paying rent, paying for childcare, putting food on the table, etc. — without also having to pay to retrieve a towed car. But every year, California local governments push countless families that are struggling to make ends meet deeper into poverty by towing their legally parked cars. Hundreds of thousands of cars are towed each year for non-safety reasons and to collect minor debts.

That's why the ACLU of California is sponsoring AB 516, a bill introduced by Assemblymember David Chiu (D-San Francisco) to ensure California stops punishing poor people for being poor by towing their cars for non-safety reasons. Towing cars should be reserved for improving public safety and traffic flow, not punishing and plunging people into insurmountable debt. It's important to note that AB 516 will still let cities tow abandoned and inoperable vehicles.

California's towing practices are fundamentally unjust and an ineffective debt and revenue-collection tool that disproportionately impacts Black and brown communities. A 2018 review of 26,000 tows revealed that the Oakland Police Department towed cars more often from East Oakland, which is a predominantly Black and brown neighborhood, than from other neighborhoods. Reporting has shown significant racial bias in traffic stops by law enforcement agencies in various parts of the state, many of which can lead to the towing of vehicles.

Right now, cities and counties across California typically require owners to pay at least $500 to retrieve their car from the tow yard. If the car was towed because the owner couldn't afford to pay tickets or fees, the owner must first pay these off, plus any late fees, and often a release fee before they can even pay the tow yard's daily escalating storage fees.

We're talking about charging someone, who couldn't afford to pay parking tickets or registration fees to begin with, thousands of dollars in additional fees just to get their car back so they can continue working, paying rent, and providing for their families.

Many people simply can't afford to retrieve their car. In fact, a Federal Reserve study found that 46% of people in this country can't afford to pay $400 for an emergency expense without first selling something or borrowing money.

So unpaid tickets and registration fees remain unpaid, tow yards don't recoup the costs of storing people's cars, and cities have forced their residents to lose a necessary lifeline to live and work in the community.

California should do everything to make it easier — not harder — for working families to succeed. We can make a difference with AB 516.

Ask your lawmakers to vote YES on AB 516. 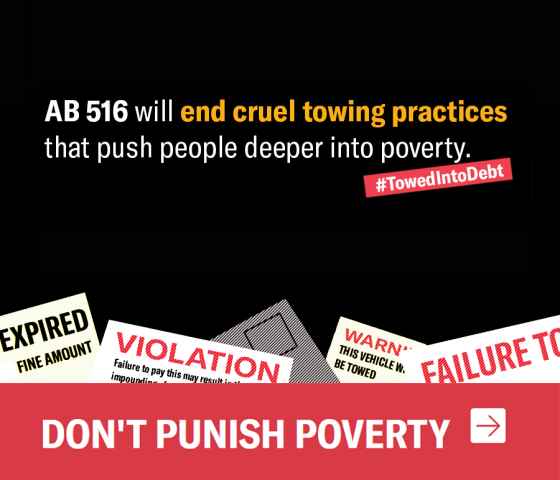