The ACLU of Southern California and its partners are hard at work to defend the rights of people detained at Los Angeles International Airpot. As the situation develops, we will post updates here.

For questions regarding the ongoing protests at LAX and ways to get involved, please contact Jess Farris at jfarris@aclusocal.org or Esther Lim at elim@aclusocal.org.

If your friends or family members are being detained at LAX or if you are anticipating their arrival at LAX, call the ACLU SoCal hotline immediately at (213) 977-5245.

In a unanimous decision, the Ninth Circuit Court of Appeals panel rejected the U.S. motion to stay the TRO issued by Judge Robart. The Muslim ban remains on freeze. 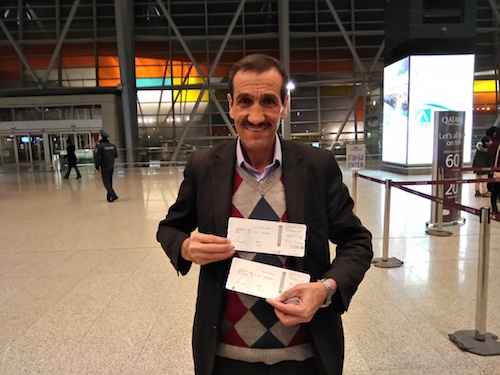 Civil and immigrant rights groups including the ACLU Foundation of Southern California asked a federal court to lift the unconstitutional ban that blocks Muslim immigrants lawfully living in the United States from becoming U.S. citizens, permanent residents, and asylees, among other things. The class action lawsuit challenges provisions of the January 27, 2017 executive order suspending the issuance of visas and other immigration benefits to nationals of Iraq, Syria, Iran, Libya, Somalia, Sudan and Yemen. Immigration attorneys have now learned from leaked documents that the order is being applied to immigrants already lawfully residing within the United States who have pending applications for asylum, lawful permanent residence and other immigration benefits.

The ACLU Foundation of Southern California and the Law Offices of Stacy Tolchin filed suit (Azad v. Trump) in federal court on behalf of U.S.-visa holders held in detention by U.S. Customs and Border Protection at LAX and denied access to legal counsel, as well as legal aid organizations – namely Public Counsel, the American Immigration Lawyers Association, Asian Americans Advancing Justice - Los Angeles, Iranian American Bar Association and National Lawyers Guild - Los Angeles – who were denied access to their clients. The petitioners have since been released from detention, but the issue of accessing legal counsel while in detention at airports remains, with more individuals expected to arrive at LAX.

A federal judge orders temporary restraining order (TRO) in Vayeghan v. Kelly, requesting Vayeghan's return to the U.S. under the terms of his previously approved visa. This follows a habeas petition that the ACLU Foundation of Southern California and the Law Offices of Stacy Tolchin filed on behalf of the Iranian citizen on Saturday, January 28. Before the court could rule on the TRO, Vayeghan was placed on a flight to Dubai to be removed to Iran.

Lawyers are still hearing that U.S. Customs and Border Protection is not complying with the order. Lawyers have heard about several instances in which some people were coercively asked to revoke their visas and turned back. They heard about two Yemeni individuals who were put on flights back to their cities of departure.

As of 9 a.m. PT, LAX officials told attorneys that 15 people were being detained, but that other individuals on flights from European hubs like Frankfurt were likely to be held upon arrival.

Both petitioners in Farmad v. Trump were released by U.S. Customs and Border Protection from detention at LAX.

The ACLU Foundation of Southern California and the Law Offices of Stacy Tolchin filed suit in federal court, seeking the release of two lawful permanent residents, detained at LAX by U.S. Customs and Border Protection on January 28. Fatema Farmad, one of the petitioners, was accompanied by her infant child, who was born in the United States. Farmad had applied for U.S. citizenship and her application was granted. Her swearing-in as a U.S. citizen is scheduled for February 13, 2017.

A federal judge in New York granted the ACLU’s request for a nationwide temporary injunction that will block the deportation of all people stranded in U.S. airports under President Trump’s new Muslim ban. The ACLU and other legal organizations filed a lawsuit on behalf of individuals subject to President Trump's Muslim ban. Read the full statement: https://www.aclu.org/news/federal-court-grants-stay-challenge-trump-immigration-ban

ACLU Foundation of Southern California and the Law Offices of Stacy Tolchin filed a habeas petition at the Federal District Court of the Central District of California, seeking the release of Ali Khoshbakhti Vayeghan, an Iranian citizen who has a U.S. Visa and landed at LAX on the evening of January 27.

The ACLU and other legal organizations filed a lawsuit on behalf of individuals subject to President Trump's Muslim ban. The lead plaintiffs have been detained by the U.S. government and threatened with deportation even though they have valid visas to enter the United States. One plaintiff, for example, worked for the U.S. military and his life was in danger in his home country due to that relationship. The other’s family was also threatened because of perceived ties to the United States.