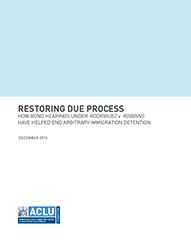 In Rodriguez v. Robbins, ACLU SoCal and the ACLU Immigrants' Rights Project represent a class of noncitizens who have been incarcerated for six months or longer in the Los Angeles area while they litigate their immigration cases, and who have been denied a constitutionally-adequate bond hearing to determine whether their prolonged detention is justified.  In the past three years, the ACLU has won important rulings that have required the government to provide bond hearings to class members—their first meaningful opportunity to seek release and return to their loved ones during the lengthy time it can take for their cases to wind their way through the immigration court process.

The government has conducted thousands of bond hearings for class members under the court’s orders over the past three years. Based on data produced by the government, this report presents statistics on the outcomes of class members’ bond hearings during an 18-month period, from October 2012 to April 2014.  It provides the first comprehensive examination of Rodriguez bond hearings, and provides important insight into the implementation of the court’s orders and the immigration detention system more generally.

As documented in the report, immigration judges have found that the overwhelming majority of class members should be released on bond or other conditions of release. Thus, their prolonged detention — at great personal cost to themselves and their families and massive financial cost to taxpayers – was unnecessary.