WASHINGTON – In a 6-2 decision today, the Supreme Court overturned a lower court and ruled that Michigan’s Proposal 2 is constitutional. Proposal 2 is a 2006 ballot initiative that led to a state constitutional ban on race-conscious college admissions policies in Michigan. It specifically barred students from lobbying universities to consider race as one of many factors in admissions."Proposal 2 unfairly keeps students from asking universities to consider race as one factor in admissions, but allows consideration of factors like legacy status, athletic achievement and geography," said Mark Rosenbaum, the American Civil Liberties Union attorney who argued the case, Schuette v. Coalition to Defend Affirmative Action, before the Supreme Court in October. "This case is ultimately about whether students of color in Michigan are allowed to compete on the same playing field as all other students. Today, the Supreme Court said they are not." 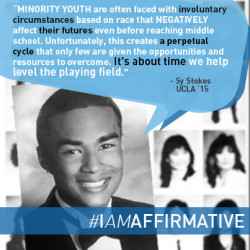 In 2006, the ACLU, ACLU of Michigan, NAACP, NAACP Legal Defense and Educational Fund, and the law firm of Cravath, Swaine and Moore, LLP, filed a lawsuit on behalf of students, faculty and prospective applicants to the University of Michigan challenging Proposal 2. In 2012, the U.S. Court of Appeals for the Sixth Circuit found Proposal 2 unconstitutional for placing an unfair burden on those seeking to have race considered as one of many factors in university admissions.
"This decision gives donors, athletic officials, and alumni unencumbered access to university officials when lobbying for their constituents, however completely shuts out supporters of greater diversity on campus from the admissions process," said Kary L. Moss, executive director of the ACLU of Michigan. "In order to have their voices heard, students of color must now take on the arduous task of overturning the constitutional amendment. This is the definition of a separate and unequal system that will result in Michigan continuing to lose students and faculty of color to states that have the flexibility to consider the whole person before them."
There has been a notable decline in minority enrollment since Proposal 2 took effect.
For example, African-American enrollment plummeted 33 percent at the University of Michigan/Ann Arbor between 2006 and 2012, even as overall enrollment grew by 10 percent.
"While this decision is a setback for diversity efforts in Michigan, it is important to note that this case did not address the merits of race-conscious admissions, which have been previously upheld by the court, as the justices emphasized in today's ruling," said Leticia Smith-Evans, interim director of the Education Group at the NAACP Legal Defense and Educational Fund.
Plaintiff Kevin Gaines, a professor of history and African-American Studies at the University of Michigan, said he is concerned with how today’s ruling will impact the quality of education students receive at Michigan universities.
"Students deserve a robust education where a variety of viewpoints are shared and debated," he said. "Proposal 2 has meant less diversity in our universities, which has had a chilling effect on the quality of discourse in the classroom. Unfortunately, that will continue, at least for the time being, in Michigan."
A copy of today's Supreme Court ruling is at: www.supremecourt.gov/opinions/13pdf/12-682_j4ek.pdf
This press statement is available online at: aclu.org/racial-justice/us-supreme-court-overturns-lower-court-rules-michigans-proposal-2-constitutional
More information on this case is at: aclu.org/racial-justice/schuette-v-coalition-defend-affirmative-action
CONTACT: Inga Sarda-Sorensen, ACLU National, 212-549-2666; media@aclu.org Rana Elmir, ACLU of Michigan, 313-578-6816; relmir@aclumich.org Jennifer Parker, NAACP LDF, 734-678-4678; jparker@naacpldf.org