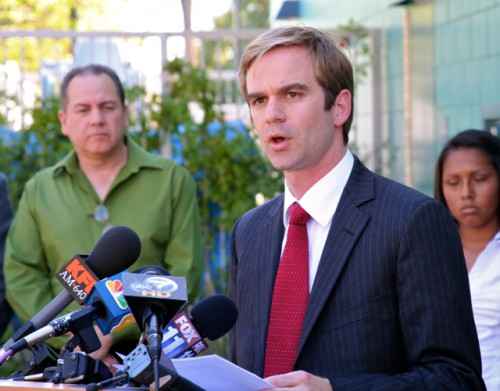 David Sapp worked as a staff attorney at the ACLU of Southern California from 2009 to 2014. Sapp then served as director of education advocacy and legal counsel.

Sapp, 36, was a staff attorney at ACLU SoCal from 2009 to 2014 before being named the organization’s director of education advocacy and legal counsel. He also served as the director of education advocacy for the ACLU of California, a collaboration of the three California-based ACLU affiliates.
In his role as director of education advocacy, he was instrumental in the implementation of California’s Local Control Funding Formula, the historic reform of the state’s K-12 education finance and governance system. Under the funding formula, school districts receive additional money based on how many high-needs students—English learners, foster youth, and low-income students—they enroll. They also must adopt plans, with input from all relevant local stakeholders, on how they will use state funds.
“It has been such an honor working with an organization like the ACLU, which is unique in its ability to do innovative work involving policy advocacy, community engagement, legislative advocacy and litigation in multiple regions across our state,” Sapp said Monday. “I’m excited about continuing the work on the Local Control Funding Formula in my new role.”
During his tenure at ACLU SoCal, Sapp has focused primarily on education and juvenile justice issues, most recently leading the education equity program for the three California-based ACLU affiliates, including local and statewide policy advocacy, legislative and administrative advocacy, public education, and litigation.
He has served as lead counsel or counsel on class action and complex civil cases related to education equity, police practices, juvenile justice, and issues, such as Casey A. v. Gundry, a case regarding failure of a juvenile probation camp to provide minimally adequate education and rehabilitation services to detained youth.
He served as counsel in the Reed v. State of California, which addressed the inequitable distribution of teacher layoffs in inner city schools in Los Angeles, and Doe v. State of California, which focused on the state’s failure to ensure districts provide a free public education system as required by the California Constitution.
Hector Villagra, executive director of ACLU SoCal, calls Sapp a “tremendous advocate” who “embodies all the traits of a great public interest lawyer. He is selfless and tireless, he is intelligent and innovative, and he is devoted to his clients and to fighting injustice. We have been extremely fortunate to work with and learn from him.”
Sapp was awarded Stanford Law School’s 2012 Miles L. Rubin Public Interest Award, presented annually to a Stanford alumnus whose outstanding work has advanced justice and social change in the lives of vulnerable populations on a community, national or international level. In particular, the Rubin Award is intended to highlight concrete and sustainable approaches and solutions to a societal problem.
Before joining ACLU SoCal, Sapp clerked for U.S. Ninth Circuit Court Judge Raymond C. Fisher and was a Skadden Fellow at Advocates for Children’s Services in Durham, North Carolina, where he represented students in school discipline and special education proceedings. He began his legal career clerking for Judge Myron H. Thompson on the U.S. District Court for Middle District of Alabama.
Contact: Ed Boyer, 213.957.5242, eboyer@aclusocal.org