DA Lacey was first elected to her seat in December of 2012. Since then, 22 people have been sentenced to death. Key findings from the report include:

"L.A. County is an example of everything wrong with the death penalty," said Cassandra Stubbs, director of the Capital Punishment Project at the ACLU. "Abysmal defense lawyering, geographic disparities, and racial bias are the legacy of its unfair and discriminatory use of the death penalty. L.A. is one of the largest drivers of death sentences nationwide, despite the repeated rejection of the death penalty at the ballot box by L.A. voters. DA Lacey should take a step forward for racial justice and help end America's failed experiment with the death penalty by announcing she will no longer tolerate death penalty cases under her watch."

In March 2019, California Governor Newsom issued a moratorium on the death penalty, effectively halting all executions while he’s governor. Despite that, DA Lacey continues to sentence people to death.

"California is at a moment of reckoning with respect to the death penalty," said Jessica Farris, director of criminal justice at the ACLU SoCal. "Governor Newsom's moratorium on state-sanctioned killing reinforces what Angelenos have repeatedly expressed at the ballot boxes — the discriminatory and unfair death penalty has no place in a just California. Despite the moratorium and opposition from the DA's constituents, Lacey's office continues to seek the death penalty in the face of unmistakable evidence that the practice disproportionately affects Black and brown people and people without access to quality counsel. DA Lacey holds the power to immediately end death sentences in L.A. County. We hope she will." 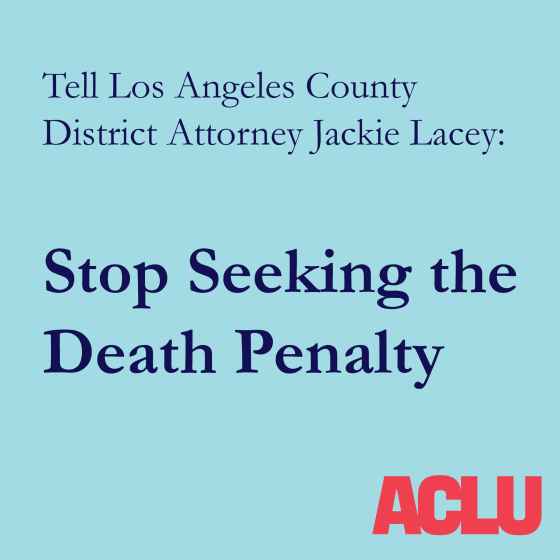 Urgent Action Needed to Ensure Equal Protection, Due Process, and...