Worried About the Repeal of Obamacare? So Are We. Here’s Why.

The following post was originally published on the ACLU Nationwide website and co-authored by Vania Leveille, senior legislative counsel.

Next week, members of Congress will head home to their districts and states for a weeklong recess.  Those brave enough to face their constituents while they are home shouldn't be surprised to find that one of the Republican majority’s top priorities — repealing the Affordable Care Act, also known as Obamacare — is far from popular.

The ACA has played a significant role in ending policies and practices that discriminated against women, LGBT people, people with disabilities, and racial and ethnic minorities.  It made health care coverage and access fairer and more equitable, and it has helped preserve the life and liberty of millions of people across the country.

Now, the millions of people who have come to rely on the ACA are making their voices heard at townhall events around the country, urging their representatives not to dismantle this lifesaving law.

Perhaps you’re one of them. Or perhaps you know someone who is. However the law has impacted you, here are just a few of the many reasons to stand up for the ACA:

Today, these gains and protections are at risk. And that is unacceptable.

Up to 32 million people could lose coverage as a result of ACA repeal. Discriminatory policies could be reinstated and would almost certainly threaten the care that women, people with disabilities, and LGBT people need to live lives that are healthy and free.

That’s why the ACLU will fight against repeal of the ACA.

Speaker Paul Ryan has said that Republicans will release their ACA repeal bill after next week’s recess.  It’s expected that the bill will also defund Planned Parenthood. An entirely separate blog could be written about just how devastating the impact of this would be — but, in short, it would block Medicaid patients from using Planned Parenthood health centers, cutting off their access to preventive care services like breast exams, cancer screenings, STI tests and treatment, and birth control.  As a result, Planned Parenthood health centers, which 2.5 million people rely on for care every year, may be forced to close their doors.  This would have a disastrous impact on health care access, particularly for women and low-income people, across the country—particularly when combined with the impact of ACA repeal.

We can’t let this happen. If you agree, make sure that your members of Congress hear from you.  Next week, they’ll be in the neighborhood. 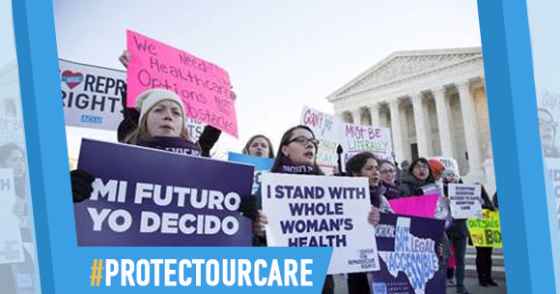