The system, caught on tape

Why we need body cameras now more than ever

Today’s decision by a Staten Island grand jury not to indict NYPD Officer Daniel Pantaleo for having killed Eric Garner using a chokehold during an arrest for selling untaxed cigarettes has sparked enormous outcry and frustration. Garner’s killing was captured on video and has been viewed by millions. Does that mean that video doesn’t matter? That getting police to wear body cameras won’t help hold officers accountable?

Not a bit. The fact that video evidence didn’t lead to an indictment doesn’t suggest a problem with video, but a problem with grand juries. In the wake of last week’s decision of a grand jury not to indict police officer Darren Wilson for killing 18-year-old Michael Brown in Ferguson, as well as today’s decision in the Garner killing, there’s been a lot written about how seldom grand juries hold police officer accountable for killing civilians, and I won’t repeat that here. But despite the grand jury decision, having video footage in incidents like this one matters a lot.

Video evidence gives the grand jury important evidence about what happened when an officer kills a civilian. The Ferguson grand jury decided not to indict Wilson in part because of conflicting accounts of what happened — who grabbed who first, who acted as the aggressor. The grand jury appeared to discount the testimony of some eyewitnesses, including Brown’s friend who was with him at the time of the shooting, in favor of the account by the officer who pulled the trigger. Video evidence helps resolve those conflicts, so that juries or investigators don’t just defer to officers’ testimony.

Video might not resolve every dispute, it might not guarantee indictments or discipline in every case where they’re deserved — but the chances of justice without it seem much less.

Video evidence also provides the public with crucial information about how police operate. It’s in large part because of the video footage that the nation is so outraged at Garner’s killing. We know what happened — we may not have all the evidence the grand jury had, but we know a lot more than if no video existed. We know what Garner said, what he did and we can judge for ourselves how threatening he seemed, or didn’t. We can judge for ourselves whether we want officers who act in our name should to act as Officer Pantaleo did, or not. 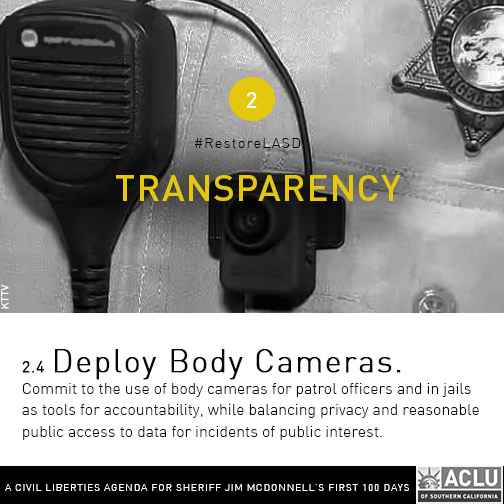 L.A.'s got a new sheriff, and we've gifted him a new agenda to restore the LASD. Learn more.

More importantly, when we can judge for ourselves when officers act wrongly, we can also judge when the systems to hold officers accountable are failing. If a grand jury fails to return an indictment in a controversial incident, or if a department says a killing was within policy, video makes it harder to say that the public doesn’t really know the full story. When you say the system’s broken, it’s harder to say you’ve got your facts wrong if there’s video evidence.

Video footage might not have meant an indictment for the killing of Eric Garner, but it means that many more people are demanding that the system must give him justice or the system must change. That’s a step toward accountability, and one we think body cameras will help provide.

Peter Bibring is director of police practices for the ACLU of California. Follow ACLU_SoCal.