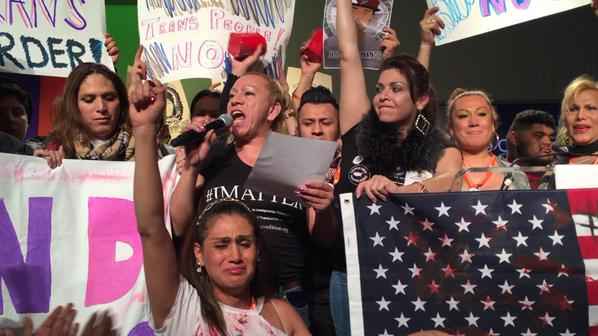 Her name was Lamia Beard. She was from Virginia.

Her name was Taja DeJesus. She was from California.

Her name was Penny Proud. She was from Louisiana.

Her name was Ty Underwood. She was from Texas.

Her name was Yazmin Vash Payne. She was from California.

Her name was Bri Golec. She was from Ohio.

Her name was Kristina Gomez Reinwald. She was from Florida.

Seven transgender women that we know of have been murdered in this country since 2015 started. At least five were women of color. It's a horrifying litany already, and it's only February.

Writer and activist Janet Mock blogged on Monday about how she maintains hope in the face of these tragedies because recent media visibility for transgender women of color, like herself and Laverne Cox, is gradually helping "reshape the narrative of trans women's lives." At the ACLU, we also feel a responsibility to do whatever we can to change the landscape for trans people in the United States. Through litigation, policy advocacy, and education, we're working to enhance safety, increase opportunity and foster dignity for all transgender people, but especially for trans women of color.

Toward this end, much of the ACLU's work in recent years has focused on getting policymakers and the public to appreciate the basic human dignity of transgender individuals. It goes without saying that transgender people have the right to do everything non-transgender people do, from using restrooms in peace to accessing medically necessary health care to serving in the military, but unfortunately there are still people and institutions denying this basic truth. Conversations in the halls of power and in the media about righting these exclusions help Americans understand what it means to be transgender and appreciate trans people's humanity.

Another thread of our work has involved protecting the safety of transgender people, often in relation to the criminal justice system. Disproportionately forced into survival economies because of widespread discrimination and stereotyping based on both gender and race, transgender women of color are particularly vulnerable to cycles of arrest, incarceration, trauma and violence.

We've both responded to individual instances of these problems and worked to raise awareness of the underlying issues, such as by helping Monica Jones fight a Phoenix police practice of profiling and arresting trans women of color as presumed sex workers, and helping Connecticut teenager "Jane Doe" resist officials' efforts to imprison and isolate her without criminal charges.

Where feasible, we've also worked with governments to secure policies and training that increase law enforcement sensitivity to the needs of transgender people. The LGBT Project's work on these issues dovetails with that of many other advocates, including our colleagues within the ACLU at the Racial Justice Project, the Criminal Law Reform Project, the Campaign to End Mass Incarceration and affiliate offices around the country.

Being able to participate fully in education and in the workplace won't guarantee that transgender girls and women of color are safe from violence, but it will reduce the vulnerability that comes from economic marginalization. Further, seeing transgender peers succeed at work and at school will help other Americans work through their prejudices and misconceptions regarding transgender people.

Stop the violence against transgender women of color

Unfortunately, there's no lawsuit the ACLU can file, no bill we can push through Congress and no report we can issue that will immediately stop violence against transgender women of color. But that does not mean we can throw up our hands and dismiss the issue as irrelevant to our legal work. We stand with advocates around the country in honoring the lives of trans women, by working to address the causes of these tragedies. We stand with those who say not one more.

For further discussion of how legal and policy work can help save trans lives, check out this article from The Nation.