Kids caught at the border deserve due process, including lawyers

The following article was published in the Los Angeles Times.

When Juan Pablo Guerrero Diaz left El Salvador to come to the U.S., his daughter was still in diapers. Now she is 14, and this year, after fleeing for her life, she was reunited with her parents in Los Angeles.

For the girl, the perilous journey north promised greater safety than life in El Salvador, a country with one of the highest homicide rates in the Western Hemisphere. Gang members repeatedly threatened her, and they attacked her and her sister.

A growing number of children are traveling thousands of miles and braving hunger, dehydration, robbery, extortion, sexual abuse, kidnapping and murder to reach the United States. As many as 80,000 minors traveling alone are expected to seek refuge this year, and the number could reach 130,000 by 2015.

Once here, however, those children often face a new risk: U.S. immigration courts. Unlike criminal defendants, immigrants are not entitled to court-appointed attorneys, no matter their age or lack of resources. In fact, immigrant children, some as young as 2, 3 or 4, must stand alone against government lawyers. They theoretically can testify, present evidence and cross-examine witnesses, and file supporting documents. But when a child is without a lawyer, the deportation hearing becomes a one-sided argument about why deportation is justified. 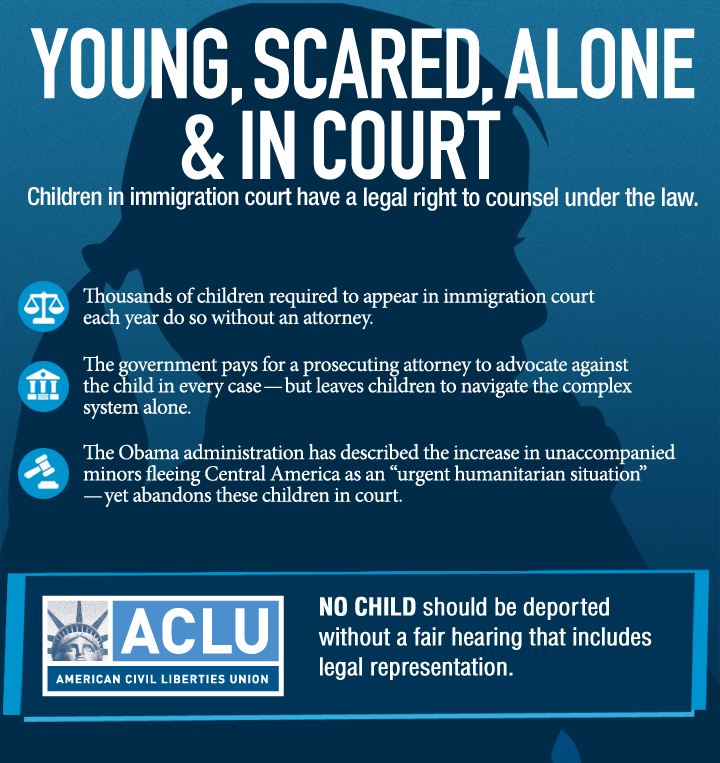 Learn about our case

On Wednesday, the American Civil Liberties Union Foundation of Southern California and the national ACLU, along with a coalition of immigrant rights groups, filed a federal lawsuit in Washington state to ensure that Guerrero Diaz's daughter and other immigrant children receive a fair hearing. Some have lived here since they were babies but also lack the resources to hire an attorney.

The Obama administration has responded to the current crisis by promising to provide additional resources at the border. The president is seeking to hire more immigration judges to fast-track the deportation of children. The administration also initially expressed interest in amending current federal law to allow Central American children to be screened by Border Patrol agents, who could turn them away immediately without ever going before a judge. Obama's actions indicate that he questions whether any of these children have valid claims to stay in the U.S. He could not be more wrong, if that is the case.

Though many of the president's critics are speculating about why these children are coming, few admit the obvious: Thousands of these children are refugees, having fled their homes and risked a harrowing journey because of extreme crime, violence and poverty in their home countries. For the most part, the children are from Honduras, El Salvador and Guatemala, countries plagued by ruthless street gangs and drug traffickers.

Indeed, according to a 2013 report by the United Nations Office of Drugs and Crime, Honduras has the world's highest murder rate, El Salvador ranks fourth and Guatemala fifth. As Leslie Velez, an official with the U.N. High Commissioner for Refugees, has concluded, many of these children and young adults "aren't coming here for economic opportunity. They are fleeing for their lives."

For these and other reasons, many of the children are potentially eligible for relief from deportation; they may have valid asylum claims or qualify for special visas for children who are abandoned or are victims of human trafficking. A recent report from Velez's agency estimates that about 60% of the children might be eligible for some form of humanitarian protection. Likewise, a 2012 report from the nonpartisan Vera Institute of Justice identified 40% of immigrant children as eligible for some protection under U.S. immigration law.

Guerrero Diaz believes his daughter has such a claim. He is a truck driver who has temporary protected status in the U.S. but cannot afford an attorney for her. They have sought pro bono help, but legal aid services are overwhelmed with requests. She needs to get her court proceedings moved from Texas, where she was detained by the Border Patrol in January, to L.A., but doesn't know how to make this simple request.

Now she is due in court in September, in Texas. She has no attorney, and will face possible deportation unless we prevail in our lawsuit. If we as a nation truly believe in the concept of fairness, we must summon the will and expend the resources needed to provide appointed counsel for her and for all the unaccompanied children facing such proceedings. Fairness demands that we protect against the possibility of deporting children who would otherwise qualify to remain in the U.S.

"How we as a nation treat these refugee children fleeing for their lives will speak volumes about what we truly value."

The appointment of counsel is the only way to ensure that children with potentially valid claims can present the necessary arguments and proof. Given the complexities of immigration law and the language and cultural barriers immigrants face, it should surprise no one that attorneys matter in immigration proceedings. A 2012 study of New York immigration courts showed that immigrants who proceed without representation are five times more likely to lose their cases than those who have counsel.

How we as a nation treat these refugee children fleeing for their lives will speak volumes about what we truly value. More than compassion or pity, what these kids need is for Congress and the president to exhibit the characteristic that unites us as Americans: a fundamental sense of fairness and due process.