The Injustice of Deporting Children Without Representation

The following post originally appeared in the Los Angeles Times. 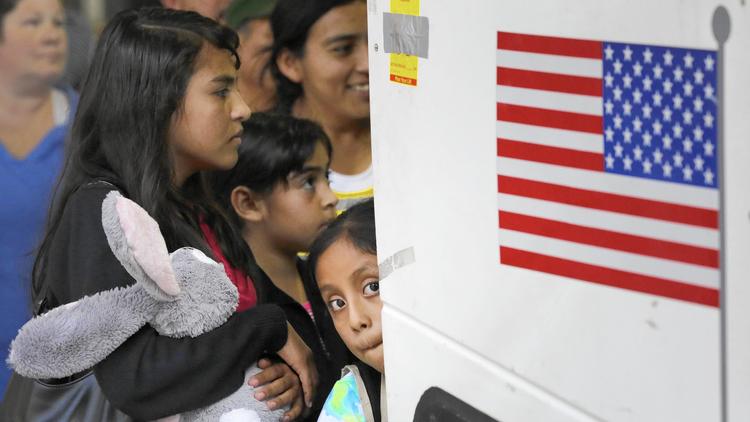 Immigrants from El Salvador and Guatemala who entered the country illegally board a bus after being released from a family detention center in San Antonio, Texas in 2015. (Eric Gay / Associated Press)

A Department of Justice immigration judge recently made headlines for testifying that 3- and 4-year-old migrant children could be taught immigration law and could competently represent themselves in court.

“You can do a fair hearing,” said Judge Jack H. Weil. “[Children] get it. It's not the most efficient, but it can be done.” He was testifying in a deposition for a federal lawsuit brought by the ACLU and other legal organizations to challenge the government's failure to appoint counsel for children facing deportation.

Weil's bosses promptly disavowed his comments, and he claimed his words had been taken out of context. But don't be fooled. Weil is an assistant chief immigration judge responsible for training other judges on cases involving children. He is not just knowledgeable about how young people are treated in immigration court, he facilitates the process. His deposition unmasks the government's deplorable position: Deportation hearings in which children must defend themselves are not right, but they will continue.

As it stands, a patchwork of federal and state programs fund counsel for some migrant children through grants to nonprofit legal organizations. Others get pro bono assistance from private attorneys or the children's relatives pay for representation. But many children simply aren't represented at all, even in cases where they may be deported to countries where they could face violence and even death.

The results are what you would expect. Children without lawyers were five times more likely to be ordered deported in the nearly 53,000 cases completed between October 2012 and August 2015.
In those cases, 19,804 were not represented and ordered deported while 4,769 who had lawyers were also ordered to leave the country. Of those children with lawyers, 24,933 were allowed to remain in this country, and 3,345 who were unrepresented were also allowed to stay. Nationwide, 64,000 children's cases are still pending.

When U.S. Atty. Gen. Loretta Lynch was asked about Weil's comments at a Senate Judiciary Committee hearing March 9, she said, “In no way does the Department of Justice feel that children [3 or 4 years old] or, frankly, children who are older, can or should represent themselves individually.”

And yet, when she was asked directly if counsel should be required, Lynch replied that current law “does not provide the right to counsel.” In other words, the government will continue to put children through deportation proceedings without a lawyer. If the government were honest about the constitutional requirements of due process, it would acknowledge its legal obligation to provide unrepresented children with legal counsel. If due process doesn't support this obligation, the concept is meaningless.

The government has pointed to the cost of providing counsel in these cases. But due process is about doing what's necessary to protect the rights at stake, not what's the most inexpensive or expedient. And when it comes to expense, we must also ask how the government can spend the money to hire a trained prosecutor to appear against the child in every case, but then claim that it's too expensive to level the playing field?

The most appropriate resolution to ensure that we aren't deporting those who would otherwise qualify to remain in the U.S. would be legislation that requires counsel for migrant children. Until that happens, the Justice Department could at least prioritize its deportation cases by moving those children who are represented to the front of the line and those who aren't to the back. This would give those who are currently unrepresented additional time to seek out a pro bono attorney or funds for representation, and it would mean that the cases would proceed only against those children who have counsel.

But even this step toward justice would first require the government to admit something it has so far resisted: The United States can, and must, do better than putting any child through deportation proceedings without a lawyer.

Hector Villagra is executive director of the ACLU of Southern California.