We're working on a case that will make your hair stand on end.

Our client, Naji Hamdan, a U.S. citizen, was detained and tortured this fall for three months by the United Arab Emirates with United States involvement. Naji is still in prison there, now under the custody of local officials who charged him with terrorism-related offenses based on coerced confessions. 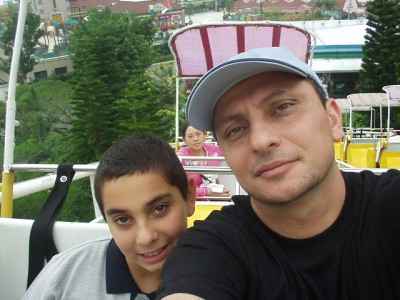 For over two decades, Naji and his family lived in Hawthorne, California, where he ran an auto-parts business and helped manage the Islamic Center of Hawthorne, a mosque and community center. He was also monitored by the FBI. The past two years were especially intense. Naji's brother, Hossam, and others who know him from his activities at the Islamic Center have all said that he's a peaceful family man who would never support violence or engage in terrorism.

Because of the U.S. government, Naji was a victim of violence. He was severely beaten and kicked with military boots, strapped into an electric chair and threatened with its use.

Urge Secretary of State Hillary Clinton to intervene and get Naji released by signing our petition.

In 2006, Naji decided to relocate to the United Arab Emirates for business and family reasons. This summer, FBI agents traveled from Los Angeles to the U.A.E. to continue their questioning of Naji. Six weeks later he was taken into custody by agents of the U.A.E. state security forces and detained incommunicado for the next three months.

His brother and his wife, Mona, both U.S. citizens, were frantic. They contacted the ACLU/SC for help. On November 26, 2008, one week after lawyers for the ACLU/SC filed a lawsuit alleging that the U.S. government was responsible for his detention, Naji was transferred from U.A.E. state security custody to the Al Wathba prison in Abu Dhabi where he remains to this day, charged with terrorism-related offenses.

After the transfer, Naji was able to finally contact his family and detailed to an American consular official how he was severely tortured while in U.A.E. state security custody and forced to confess to crimes that he did not commit.

His torturers blindfolded Naji, so he couldn't see them. Naji heard one of the interrogators speak native English with an American accent. He told Naji to cooperate with the local interrogators or else. The other interrogators asked him questions about topics only federal agents would know.

From all angles, his imprisonment looks like it's been done at the request of the U.S. government, and his interrogation, which included severe torture, was done with participation of a U.S. federal official. If the U.S. government requested or participated in his detention and torture in the U.A.E., the United States government has violated this U.S. citizen's most fundamental rights.

Naji's situation is now urgent. If his prosecution is allowed to proceed in the U.A.E. based on evidence obtained through torture, Naji will receive a deeply unfair trial and unjust sentence.

Please help us urge Secretary of State Hillary Clinton for Naji's release and that he be assured his due process rights. In addition, the role played by the U.S. government in causing Naji's detention and torture must be thoroughly investigated. Naji must be treated as all Americans deserve to be treated, with dignity and respect for their rights.