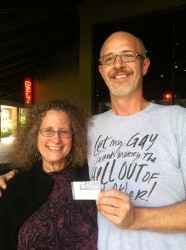 In an instance, all the rainbow flags and balloons overwhelmed me. So I chose to approach the one table — the ACLU — where not everything on display included a rainbow. That decision turned out to be a formative one. I became a card-carrying member of the American Civil Liberties Union. And in the years that followed, I learned to embrace my identity.

I have developed an enduring relationship with the ACLU. I've remained a member, have served on the board, and now I have the privilege of helping to manage one of the largest of the 53 ACLU affiliates in the country.

Looking back on June 1993, it's clear the Pride organizers were hopeful (though perhaps a bit premature) when they adopted "Our Time Is Now" as the theme that year. Remember, we were still considered criminals in many states; we were prohibited from serving our country.

Though much has changed since my first Pride celebration, we still face hurdles to full equality. We lack federal protections in the workplace and for LGBTQ students.

Yet, the progress we have achieved gives us much to celebrate. It seems each day another state recognizes the rights of gay and lesbian couples to marry. And thanks to the ACLU's victory last year at the U.S. Supreme Court in the Windsor case, these couples finally have access to the more than 1,100 rights the federal government has granted to opposite-sex couples since time immortal.

As a gay man who also teaches sexual orientation law part-time, I'm sometimes asked why I don't work for a single-issue, gay rights organization. To be sure, organizations that focus exclusively on LGBT rights achieve important victories for our community. But for me, the answer to the question is simply this: I work for the ACLU for the same reasons I've been carrying that ACLU membership card for 21 years.

It's the one membership I won't let lapse — because the ACLU's docket on criminal and racial justice, on economic and disability rights, matches my commitment to social justice, which goes beyond advocacy for just my own community; because the ACLU is working around the clock to ensure that people whose skin color matches that of my partner, Lamont, don't face stricter and more frequent criminal sanctions simply because of their race; and because the ACLU's more than 75-year history of advocacy on behalf of the LGBT community means we have been doing this since before any LGBT legal rights organizations existed. We continue groundbreaking advocacy on behalf of the LGBT community in almost every state. Turns out the ACLU wears the colors of the rainbow proudly.

Moreover, because the ACLU's integrated advocacy focuses on such a broad array of issues, it means our advocacy on immigration reform also benefits "undocuqueer" individuals; our work to generally advance reproductive justice also provides access and resources for gays and lesbians who desire to become parents.

So, be on the lookout for people signing up new ACLU members as you don your rainbows, and join us in celebrating Pride. Then let's get back to the work at hand, together.