ACLU Report Cites Chaplains and Other Civilian Witnesses to Pervasive Abuse of Inmates by Deputies at L.A. County Jails

The ACLU of Southern California is calling for the resignation of Sheriff Lee Baca today following the release of its annual Jails Report. The report, released today, chronicles a pattern of severe and pervasive abuse of Los Angeles County jail inmates at the hands of deputies.  This climate of violence has continued for years under the leadership of Sheriff Lee Baca, who has covered up and ignored the claims of the brutality.

“Sheriff Baca bears ultimate responsibility for the horrific details we uncovered compiling this report and must step down,” said Peter Eliasberg, ACLU/SC legal director.  “Deputy-on-inmate abuse has reached levels we’ve never seen before.  Now we have chaplains and other civilians coming forward who have seen the brutality themselves, and their declarations vindicate the claims of prisoners.  Contrary to what the Sheriff and his spokesperson contend, hundreds of inmates are telling the truth about deputy abuse.  This report clearly demonstrates that there is a salient pattern of unprovoked, excessive force and abuse against inmates, many of whom are not resisting.”

Though the ACLU has issued two prior reports detailing deputy-on-inmate abuse in the jails, this year marks the first time that chaplains and other civilians have come forward with first-hand accounts.  According to the Los Angeles Times, the FBI has initiated an investigation into the reports. 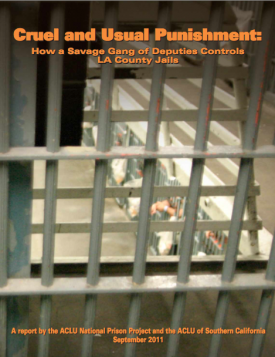 The ACLU Foundation of Southern California has received several thousand complaints from prisoners in the L.A. County Jail system in the past year, hundreds of them about deputy-on-inmate abuse.  The complaints reveal that deputies do not act alone; groups of them often attack non-resisting inmates.  In other cases, they enlist other inmates to carry out their orders of abuse. In one instance, inmates sexually assaulted another inmate with a broomstick, while on another occasion others raped an inmate while holding his head in a flushing toilet; all with the apparent cooperation of the Los Angeles Sheriff’s Department employees.

Former inmate Gordon Grbavac received a severe beating from deputies that sent him to the jail’s clinic.  “One deputy grabbed me on my left side and the other deputy grabbed me on my right side,” he said.  “As if I was a battering ram, they repeatedly slammed my head and cheek into the window partition that separates the attorneys from the inmates.”  After the beating, Grbavac saw his own blood splattered on the window partition and even in the next cubicle.

Thomas Parker, a former FBI agent and assistant special agent in charge of the Bureau’s Los Angeles office, reviewed declarations submitted by inmates, civilians and chaplains, as well as conducting in-person interviews. “Many of the beatings that routinely occur in the jails are far more severe than the beating of Rodney King,” said Parker.  “The violence is not the work of a few rogue deputies, but systemic.  The problem is significantly more systemic than the infamous LAPD Rampart Division corruption scandal.  It has continued unchecked for decades.  Gang-like groups of deputies have been operating in the Los Angeles Sheriff’s Department at least since the 1980s, and perhaps since the early 1970s, and these deputy gangs continue to operate today seemingly with impunity, right under the eyes of all levels of the current management of the LASD.”

“No jail in the nation matches the level of pervasive, savage, long-standing and notorious  deputy-on -inmate violence of the kind we see in L.A. County Jails,” said Margaret Winter, associate director of the ACLU National Prison Project in Washington, D.C. “But what is most stunning of all is the stubborn refusal of Sheriff Baca, the man in charge, to acknowledge there’s even a problem.”

The report also reveals the existence of gangs comprised of deputies that foment violence against inmates, and places responsibility with Los Angeles County Sheriff Lee Baca, who it says has covered up this violence and has done nothing to stop it.

“He is responsible for the safety of these inmates and has failed them,” said Eliasberg.  “Now, the Los Angeles County Jails is an institution that has become one of the most dangerous – if not the most dangerous – jails or prison system in the country. It is time for Sheriff Baca to step down.”