Recent court cases have established that elected representatives violate the First Amendment when they block individuals or delete their comments for expressing critical opinions on sites like Twitter and Facebook.

If you have been blocked from posting or commenting on an official social media page operated by an elected representative or government organization, your critical comments have been deleted, or you’ve otherwise been restricted from fully accessing official social media pages, this toolkit, "So You've Been Censored by a Government Official," can help you challenge that censorship. Our toolkit below includes a:

** Please note that the toolkit is for education purposes only and using the checklist or flow chart does not imply that the ACLU of Southern California is pursuing or would pursue legal action on your behalf or in any case. **

Why does social media censorship violate the First Amendment?

The ACLU of Southern California believes that official social media pages for elected representatives and government organizations, when they allow the public to make comments on the page, are public forums. Censoring individuals from these pages through blocking accounts or deleting comments can be an unconstitutional restriction on their right to free speech under the First Amendment.

This applies to official social media pages operated by the individual, or offices of elected representatives, or government boards, organizations, agencies, commissions, associations, or any other officially constituted group of a public entity where matters of public policy or governing are discussed. This standard does not apply to personal or campaign social media pages, nor to fake or parody pages not managed by the representative or organization.

Why does the First Amendment apply to social media pages?

After all, Ben Franklin and the other authors of the U.S. Constitution didn’t use Twitter (if only they did!)

We believe — and the courts agree — that the Constitution’s limits on government control of speech apply online as much as they do in newspapers, at marches, and in townhall meetings. In fact, the discussion at an old-fashioned townhall is similar to the discourse found on a social media page. Because it is unconstitutional for an elected representative to block critics from entering a public townhall simply because of their views, it’s also not allowable for that representative to create a social media page and then restrict people with critical viewpoints from posting or viewing content.

These restrictions only apply to official social media pages where the elected representative or organization is considered a “government actor.” A mayor’s personal Facebook page, where she posts photos of her kids and reviews of her favorite books or movies, does not qualify as an official government page. Neither does a campaign page primarily focused on her reelection where she discusses her political accomplishments. A mayor can limit access to her personal pages to anyone she wants. But if the mayor’s Facebook page includes references to her official position, links to government phone numbers, email addresses or websites, or allows individuals to either seek government services or access and discuss government information, then the page becomes a space for public speech and First Amendment protections apply.

Because the format of every social media page is different, each instance of social media censorship must be evaluated based on its specific facts.

In the several prominent court cases addressing social media blocking, judges have reviewed when and why the social media page was created, the content posted on the page, and the reasons given for why an individual was blocked. This is why taking photos or screenshots of the social media page and any blocked posts or comments is important to proving a civil liberties violation.

Lastly, if elected representatives and government agencies develop standards for communication on their social media pages and platforms, these standards must be posted publicly on the page and accessible to all viewers (e.g., posted in the “Notes” or “About” section of a Facebook page). These standards must also be applied consistently and must not block speech that is critical, unpopular, or negative to the elected official or is considered protected speech under the First Amendment. 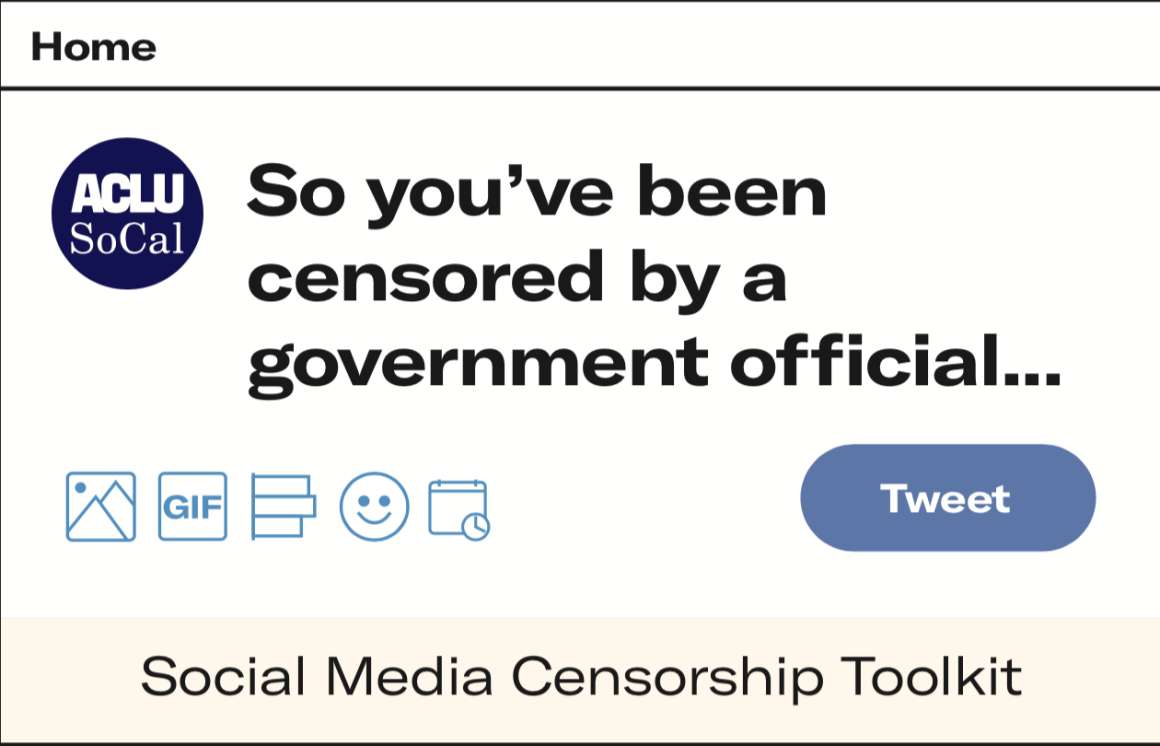 2. Use the Censorship Flowchart to determine if your constitutional rights were violated.

3. If the flowchart shows your rights were violated, contact the elected official via phone or email and ask to be unblocked (or for the official to stop deleting your comments). This low-key approach resolves many complaints.

4. If you receive no response to the above request (or if you remain blocked and/or your comments continue to be deleted), download and personalize the ACLU SoCal’s do-it-yourself Sample Demand Letter and send it to the elected official.

5. If you receive no response after 30 days, or if the government official refuses to unblock you or stop deleting your comments, contact the ACLU SoCal.

So you’ve been censored on social media by a government official. Use this flowchart to determine if your rights were violated. 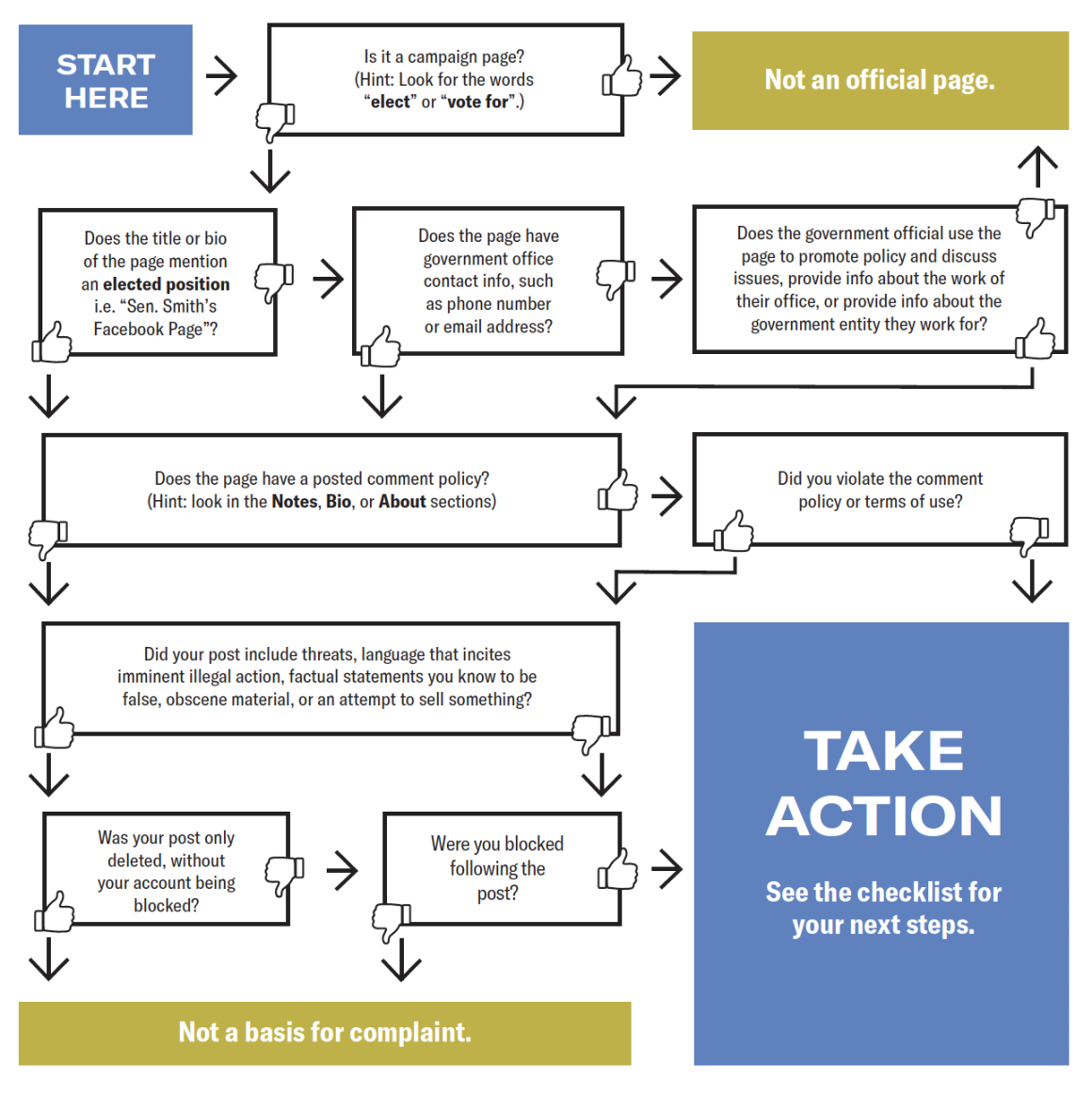 1. Fill out this form letter (.doc) based on your individual situation. Delete any unnecessary sentences, including sentences that do not reflect what happened to you.

2. After filling it out, read it through carefully, making sure that everything in the letter is true to your situation.

3. Paste any screenshots you have that prove what happened into the blank pages after the letter.

5. If emailing the letter, digitally sign it (if you can), save it as a PDF file (if you can), and email it to your government official.

6. Wait for a response. If you don’t hear back within 30 days or if the government official refuses to unblock you or stop deleting your comments, contact the ACLU SoCal.

Note: Our sample demand letter isn’t designed for situations where your post includes certain kinds of speech -- threats, inciting language, factual statements you know to be false, or an attempt to sell something -- and the post is only deleted without your account being blocked. This is because, in these situations, we believe officials are allowed to delete such comments. However, if you’re blocked after posting these kinds of speech, you are entitled to take action but should adjust our sample demand letter to address only blocking (so you should remove any references to deleting comments).